On the 21st of November, 2012, the US media exploded about Lindsey Stone (Itâ€™s Lindsey Stone and not Lindsay Stone) and her Facebook photo. The photo pictured her flicking off and yelling at the Tomb of the Unknown Soldier. Lots of sites feature angry articles and comments about her even thoughÂ Lindsey Stone did make an apology for her actions. The hurt caused by the backlash to Lindsey Stone was several times greater than the hurt she ever intended to do (she stated it was a joke). So, what caused the events to unfold the way it did?

The Other Side of the Story 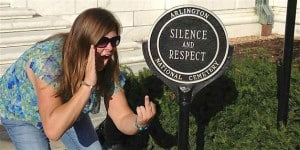 The photo that should of never been public.

My take on the story was that Lindsey Stone took the photo as a joke between her and a friend. It was sort of like a running joke they had going on. She mentioned how she took a photo of her smoking at a no smoking sign as well.

She posted the photo on Facebook to share with other friends. It was supposed to be a joke between her and her friends but, unfortunately for her, the photo ended up going viral around the Internet. After a few weeks, online newspapers like theÂ HuffingtonÂ Post made stories about her. That was when this story turned for the worse.

(The Industry doesnâ€™t want you to know about this $30 folding knife thatâ€™ll outperform $200+ knives).

News sites like Huffington Post and Gawker are all looking for the big new story. Once they saw this, they instantly realized the potential and wrote about it. For them to write about it was similar to them throwing gasoline into the fire: it made the story even more popular.

Shortly after the story picked up full steam online, TV news stations like The Today Show mentioned the story. The TV exposure was all that was needed to publicize Lindsey Stone to the rest of America. Even if you didnâ€™t know anything about the Internet, you would have known about Lindsey Stone.

(It was because of things similar to this that resulted in balisong knives being outlawed in some states).

The news site all mentioned how Lindsey Stone was fired by her employer because of the story. It has been a few weeks since this happened and, still, Lindsey Stone has not made any comments. She has remained quiet and away from all the buzz about her. Personally, I wish her the best of luck with starting a new life. All this attention was undue and, if the photo just remained private, nothing bad would have happened.

You can push bad results down by doing something called reputation management. This is where you find someone who is good at search engine optimization to create web pages that will take over the first 20 listings. Itâ€™ll hide the bad listings further down the search engine (where no one looks) so that your reputation can look clean.

I do not recommend going with a package from reputation.com because it is very overpriced and low quality. You can get a much better deal from a local SEO expert.