Please note that this review does not necessarily reflect the views of Knife Up and that it is purely an opinion expressed by someone who appreciates and knows something about knives.  If the opinion differs from yours, please respect it as what it is; an opinion!  You are free to have yours!

Are you or someone you know deploying soon? Looking for a good knife that would be helpful during a deployment? This article on the best tactical folding knife was submitted to us by John, a KnifeUp fan who was a former infantryman in the 101st Airborne. He served for 5 years and was deployed twice. Not all knives are equal and, for a deployment, you want to have the most tactical knife possible. Having a sub-par knife is only a nuisance and might even be a danger during a deployment.

KnifeUp: What is the Best Tactical Folder? 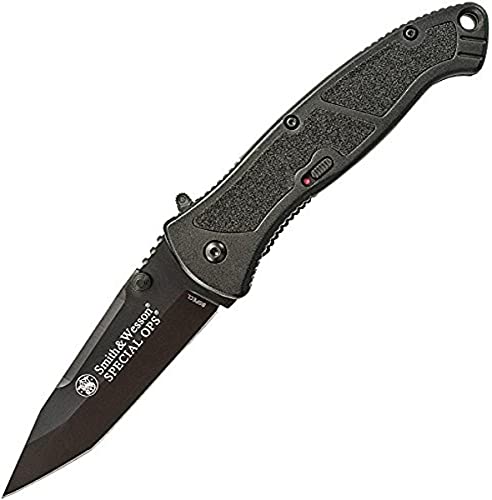 KnifeUp: Why is the Special Ops the Best Tactical Folding Knife?

John: It has an MSRP of around $50 and it is very light-weight, it’s length with blade closed is four and a half inches long and with its blade open it is seven and three quarter inches which makes it small enough to carry around with you without getting in the way but big enough to get the job done. It has a nice comfortable grip handle which also includes a lanyard hole. It has an inline lock that prevents the blade from closing unintentionally which makes it very safe.

The blade is fairly sharp out of the box but after a quick sharpening, it should cut through things like butter!  The knife blade is also made from stainless steel so you do not have to worry about rusting parts.

The handle is made out of a special coated anodized aluminum which is why it is so light-weighting in at four and a half ounces. There is a pocket clip that is stainless steel and it is also a stationary clip that is attached to the back side of the handle so it cannot be reversible. It also features dual thumb studs for a quick and easy blade deployment.

KnifeUp: In What Way is this Knife Good for Deployment?

John: Now, keep in mind that, in my opinion, this is the best tactical folding knife for a deploying soldier. There are numerous things that you can use this knife for overseas. I was actually in the military; the Army to be exact. I served with the 101st airborne division 3rd Battalion 187th Infantry Division on Fort Campbell Tennessee for close to five years and within those five years, I was deployed twice overseas to Iraq for a total of two years.

One of the more… exciting reasons to own a good durable tactical folding knife while deployed is to open up your care packages of course!

I want to share with you some stories of when a good tactical knife came in handy or would have come in handy. One of the more obvious and more exciting reasons to own a good durable tactical folding knife while deployed is to open up your care packages! You may laugh but I want to show how a good knife can make your life a little bit easier overseas from the smallest use of the knife to the most lifesaving uses of the knife.

Okay, so we know that having a knife comes in handy when opening boxes, cutting ties off boxes or pallets that carry supplies, or even cutting parachute cord for the many uses that parachute cord has. Let’s think about some other more serious uses of a tactical knife.

For one I wouldn’t mind having a good knife when I run out of bullets in a wartime environment. It is a very sensitive subject but a reality none the less that people or soldiers get kidnapped or have been taken for as hostages because they ran out of ammunition or maybe where even just ambushed and didn’t have time to react. This is one of those life-saving scenarios that I was talking about earlier.

[The Special Ops] small enough to conceal… [making] it difficult to detect by the enemy… durable and sharp enough to use as a weapon even if it is your last resort.

Wouldn’t having a knife that is small enough to conceal in your boots (or on the back of your pants or even your leg for that matter) make a huge difference between life and death if you are being held captive without your gun?  This scenario shows how the Smith and Wesson Special Ops tactical folding knife would be ideal for this situation; it is small enough to conceal which makes it a little difficult to detect by the enemy, it is durable and sharp enough to use as a weapon even if it is your last resort and it is lightweight which will prevent you from getting tired too fast if you are using it in a life and death situation.

Having a good tactical knife also has other uses being overseas such as cutting zip tie cuffs off of detainees, detecting traps, skinning an animal for food or even just using them for sport like knife throwing. I know when I was in Iraq I always used my knife and carried it wherever I went.

KnifeUp: How Does the Special Ops Compare to Other Knives?

[Ka-bar knives were] too big and… seemed to get in the way.

John: On my first deployment I purchased a Kabar Knife and took it with me everywhere I went as well but I noticed that it was just too big and it always seemed to get in the way. The blade was extremely sharp but it was just too bulky. Comparing to the Kabar, the Smith and Wesson Extreme Ops is not as sharp as the Kabar but is more convenient as well as tactical as far as the amount of time it takes to get the knife out to use.

There you have it, you guys. A real opinion on what is the best tactical knife from a former Airborne soldier who has been there and back twice. If you want the best knife for your son or daughter, get an Extreme Ops from Smith and Wesson.

John stated that the MSRP for the Large Special Ops T6061 was near $50 but, right now, Amazon is selling the knife for considerably less than that!  This particular model has a 5-star rating on Amazon and every other knife in the same product line from Smith and Wesson received a 4 to 5-star rating as well.

If you are interested in this, you should check out our review on tactical tomahawks that are a great companion to tactical knives.

Jeffrey
Recent Posts
How to Sharpen a Knife the Right Way (Supreme Guide)
How to Close a Pocket Knife? Step-by-Step Guide (2022)
Different Types of Pocket Knives [How to Choose The Best One]