How to Throw a Knife 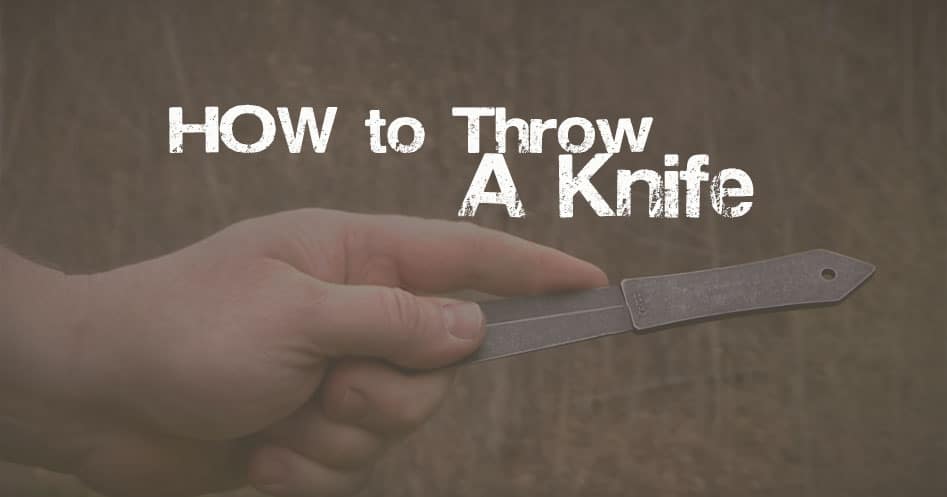 Knife throwing is an art, a science, and most importantly a passion. Like other skills, there will be those who possess a natural genetic skill and for others, the road will be much steeper. Having said that and given enough time to correct any errors in execution virtually anyone can stick a thrown knife regardless of their motive. Knife throwing is generally done for recreational, competitive, professional (the impalement arts as performed on stage with an assistant), and the martial arts. This article discusses knife throwing with the intent of sticking a thrown knife into a wooden board only. The author does not perceive a knife as a thrown or hand-held weapon.

Professional knife throwers use 14” knives. Competition throwers generally use 12-14” knives. On rare occasions and with limited use will 16” knives be used. As a professional impalement artist (stage performer) my go-to knife is a 14” Throwdini Thrower. Specifically, it’s a diamond-shaped knife with a “cutting” edge on both sides. In other words, there’s no top or bottom, only a pointy tip end, and a blunted handle end. Many competition throwers use Bowie style knives; handled with a curved cutting lower edge and straight blunted top edge.

To see some good knives to get you started, check out our article on THE BEST THROWING KNIVES.

There are many variations, but once you have the knowledge, skill, and understanding you should be able to throw anything with a point. My stage knives are 2/16 inch thick and weigh approximately 12 ounces. Truth be told, anything more than around 8 ounces will require more throwing accuracy, but even then, it really depends on your preferences and body style.

There’s an old adage that says throwing knives should be 1 oz. per inch. Unfortunately, this makes for a very heavy knife and not something comfortably thrown on a routine basis. Competition throwers often use thicker/heavier knives, usually between 3/16 and 4/16 inch thick. It’s definitely a matter of personal preference considering the objective of throwing a knife is to make it stick — neither the knife nor wood know the difference. Some knives are handled with a composite material, wood, or leather. Professional throwers, for the most part, do not use handled knives as the risk of closely thrown knives could collide resulting in a broken handle or even worse, a ricochet off the handle which has the possibility of hitting a human target.

Most throwers will stand with their opposing foot forward, i.e. a right-hand thrower will stand left foot forward. This, however, is a matter of personal preference. A beginner might experiment by putting the same foot forward as the throwing arm (similar to the typical dart-throwing stance) to see which feels most comfortable. Bodyweight is balanced over both feet with a slight shift of weight to the forward foot occurs as the throw is executed.

The grip is a matter of personal preference. Most throwers will hold the knife similar to a handshake, i.e. the fingers wrap around the bottom edge and the thumb rests along the side of the knife. Some prefer to rest their thumb on the spine. I personally find this a hindrance to the normal release of the knife and do not support that point of view for a variety of reasons.

The knife is held by either the tip (remember, the edges are not sharp) or handle. In my case, I hold the knife so the end in my palm does not fully extend down to the pinky end of my hand. In fact, the end of the knife rests between the center of the palm and the pinky end of the hand. Stated another way, if you were to balance the knife in the center of your palm, then you’d drop the edge (tip or handle) halfway below that point and the bottom edge of your hand. I find this allows for the easiest release and puts the balance point further from your hand, thus enhancing the natural rotation of the knife as it spins toward the target.

Half-spin vs. full-spin — Whenever the knife is held and thrown from the blade end it’s referred to as a half-spin (1/2, 1 ½, 2 ½, 3 ½, etc.) and when it’s held and thrown from the handle end it’s referred to as a full-spin (full, double, triple, etc.). The proper release point is when the knife is perpendicular to the ground (handle or tip directly skyward), NOT when it’s pointing at the target. Since the arm is swinging in an arc the knife flies off in a trajectory perpendicular to the release point. Thus, if you want it to go horizontally toward the target it’s got to leave your hand as your arm is extending forward, not downward or you’ll throw it into your foot.

Once released the knife makes a quarter turn that doesn’t count (in the half or full spin calculation). If you’re doing a ½ turn throw you’d be holding the knife by the tip/pointy end and it leaves your hand as the handle end is directly skyward. It begins rotating bringing the handle end facing the board — now the half-spin begins as the tip end which is facing away from the board actually rotates 180 degrees resulting in the tip end sticking into the board as the knife terminates horizontally to the ground. The same rule applies when thrown by the handle so after the first quarter turn, knife released with the tip toward the sky, it rotates ¼ turn that doesn’t count, and then it must make one full turn of 360 degrees to reach the board tip first in a horizontal profile.

Distance for a half-spin should begin around 7 feet from the board, give or take 6 inches. If the knife sticks horizontally then don’t move. If it sticks handle up (above horizontal) then it’s been in the air too long and can be corrected by moving about 6 inches forward. In other words, handle up… move up. If the knife sticks with the handle downward (below horizontal) then it’s been in the air too short of a time, not spinning enough. The solution to getting that knife to stick horizontally would be to step back 6 inches and try again. A beginner should wait to see what 3 consecutive knives do with a consistent pattern. Presuming they are throwing the same way each time then 2 of 3 knives sticking the same way will tell you which way to move, forward or backward, or even better not at all.

My style, known as the Throwdini Peel and Throw method, keeps my eyes on the target at all times. I never look at the stack of knives in my hand. I instinctively grab knifes as they are pushed off the stack held in my left hand, I bring the knife up, back around passing my head and let it almost touch my shoulder blade (the tip or handle literally points toward the ground), my arm then begins the forward motion by bringing my elbow forward and extending the arm toward the board. The knife is released as it passes through a vertical position (either handle or tip directly skyward) as it begins rotating in a pinwheel fashion, end-over-end until the point arrives at the board stopping in as close to a horizontal position as possible. There are well-known speed throwers who hold their stack with the points toward their body. I, on the other hand, hold my points away from my body. Once again, it’s a matter of personal preference. For me, however, my style allows me to throw a stack of knives faster than a ½ second per knife.

How Fast to Throw

Velocity of throw — The knife is thrown just hard enough to make it stick. It should not hit the wood and fall from being thrown too soft nor should it be thrown so hard that it risks bouncing over 7 feet back to the thrower from a slap on the board. The knife penetrates the wood only about a ¼ inch as the nature of the wood allows the knife to stick with minimal penetration. High-speed videography shows that a thrown knife is between 26 and 32 mph, usually just below 30 mph. Yes, it’s possible to throw it a few mph faster but the accuracy level goes down and not very much has been proven!

In the impalement arts (throwing around a human target in a performance venue, either at a straight board or on a spinning wheel) I follow a really good rule, “Never throw at your target, throw around… they last longer that way.” In other words, a professional thrower aims to miss vs. a competition thrower that aims to hit a bullseye on a target round. The thrower and everyone around should be constantly aware that pointed steel is flying through the air. Always be alert to anyone approaching that might step in the way or disrupt your concentration. Do not attempt to grab a bounced knife out of the air. Step away and let it fall to the ground.

Throw between three and five knives, one after the other, keeping as many variables constant. This allows for you to “read” the stick and make corrections if the handle is either up or down. Safety always comes first. Be aware of your surroundings and who might be stepping in your direction not paying attention to what you’re doing. Never throw AT someone, throw AROUND if you’re considering taking your skill to the professional level.

Even though technically I’m the author (Pete) of this post, much of the information was derived from The Great Throwdini, holder of 36 knife throwing world records. He was featured on America’s Got Talent,  Late Night with Conan O’Brien, and Ripley’s Believe It or Not!. Throwdini offers step-by-step knife throwing books and videos that are great for beginners on his site http://knifethrower.com/.