How to Throw a Bowie Knife 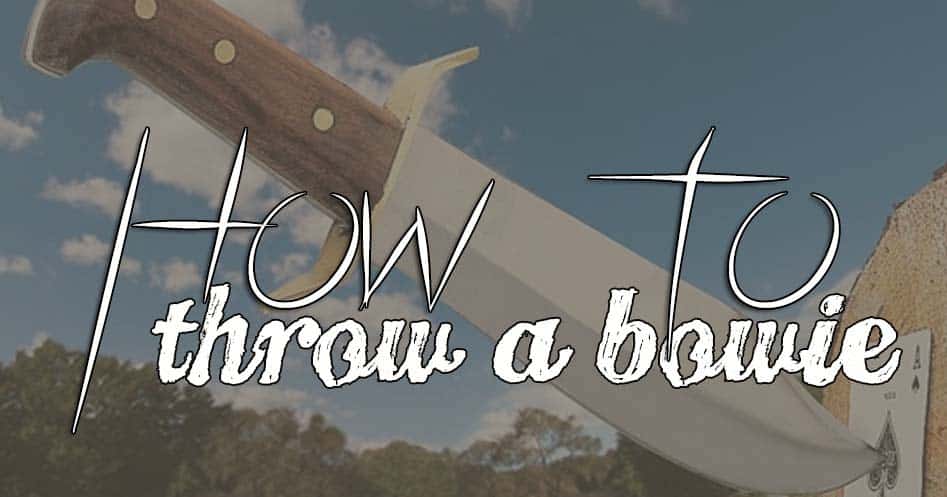 Bowie knives are great weapons.  That doesn’t mean you should use them as such, and furthermore, they’re not great for throwing.

The Bowie knife is a sheath knife with a fixed blade that was made popular by James “Jim” Bowie during the early part of the 19th century. Typically, the Bowie is bigger than the traditional types of knives. Although the Bowie knife is efficient for use in various applications – from hunting, to combat and utility purposes – most designs of Bowie knives are not considered as ideal for throwing.

For one, the weight distribution is lopsided in favor of the blade. Likewise, the knife has a bulky shape and is comparatively longer than regular knives. All these contribute to the knife’s unfavorable rating as far as knife throwers are concerned. After all, these knife-throwing practitioners are accustomed to using the smaller, traditional throwing knives. However, with the right amount of practice, determination, and a keen eye for detail, virtually anyone can learn how to throw Bowie knives accurately on a consistent basis.

Following are the proper steps in learning how to throw a Bowie knife:

Find a safe, vacant area outdoors that you can use for practicing throwing a Bowie knife. Make sure that the location poses no possible danger to bystanders and passersby, as well as to nearby properties in case of a missed or stray knife throw.

For practice, it is ideal to set up your target at a distance about 10 paces away. Mark a line from where you will throw the knife. You can use the knife, your foot, or any other marking tool you can find for this purpose.

Be familiar with your Bowie knife’s balance

Because the Bowie knife does not have the same balance of traditional throwing knives, you have to be familiar with its unique balance. To find it, extend two of your fingers and let the Bowie knife rest on them. Slide the flat of the knife’s blade up and down along your fingers until you find the most balanced area of the knife. Make sure that both the knife handle and blade edge are evenly and horizontally resting on your fingers.

Stand to face the target. Using your dominant hand, grip the Bowie’s handle with your thumb, pointer finger, and middle finger. Rest the remaining two fingers (ring finger and pinky) gently on the handle. Test your grip carefully by doing practice throws and cuts while holding on to the knife handle. Check if the blade threatens to come loose or wobbles. If it does, realign your fingers in a way that the palm of your hand touches the Bowie’s handle in a tight grip as well.

Extend your throwing hand forward in a manner that the edge of the blade is pointed directly towards the target. Draw your arm back slowly until your elbow is pointed straight upwards at a level that is even with your head. Snap the throwing arm forward quickly in an even, smooth arc, letting go of the handle the very moment that your hand starts its downward curve in the arc.

Repeat the previous steps until you consistently hit the target. Practice, as they say, makes perfect. Practice from time to time even if you have already learned the right technique to improve your accuracy.

Learning how to throw a Bowie knife is not as easy as learning how to throw a traditional throwing knife. However, it can be done. The key is in finding the balance of your knife and constant practice. Once you have mastered the right technique, you will be able to throw a Bowie with the same facility as throwing a smaller and lighter regular knife. Read other KnifeUp articles such as KnifeUp’s machete guide, KnifeUp’s survival knife guide, best pocket knives, and the best bowie knives.