How to Make a Knife Lanyard or Utility Fob from Paracord

Learn how to make an awesome knife lanyard from paracord. Paracord is a lightweight nylon rope that was originally used in the suspension lines of parachutes.  It’s also known as 550 cord, which means it has a minimum breaking strength of 550 pounds.  It is often used by the military and campers and has even been used in space by astronauts to repair the Hubble Space Telescope. This article will walk you step by step through the process of making a knife lanyard or utility fob with paracord.

The idea is to store paracord for future use (like paracord bracelets) on your knife.  You can even add a clip on one end and make it into a key chain.  In this article, I’ll show you how to weave the basic pattern and you’ll end up with a short woven fob which can be unravelled to make a utility cord or a longer lanyard for the knife.

If you don’t have any paracord, here’s great option from Amazon that’s cheap and not neon-colored! 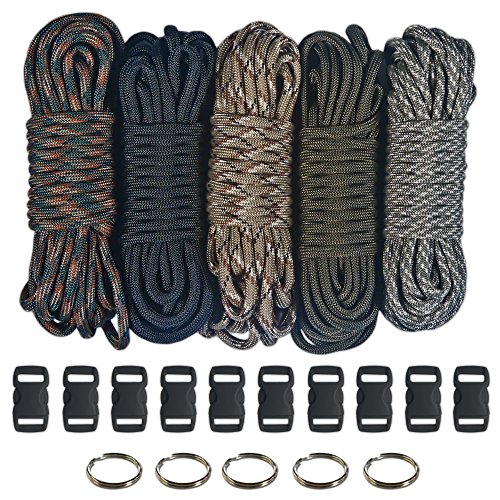 You need to know what color or colors you want as well as how long you want the lanyard to be. For every measurable inch, you will need one foot of material. (i.e. 4” lanyard requires 4’ of paracord.) You also want to add an extra inch or two to keep you from coming up short at the end of the project.

After you cut your paracord to the correct length, you need to thread the cord through the knife hole as such:

Find the center of both cords and loop cord B over cord A twice as such:

Step Four: Repeat for Other Side

Repeat with Cord A side 1 so that, now, both ends of Cord A are on opposite sides of the knife.

Tighten all four strings as this will be the base of the rest of our lanyard.

Loop Cord B and thread Cord A end 1 and end 2 again. Basically, you are doing steps 1 through 5 over again on the other string. Repeat the process until you are at your desired length.

Now to finish it off you will repeat the loops and thread one more time but DO NOT TIGHTEN.

Now thread one side of the protruding cords and thread them across and up through the middle of the knot as so:

Repeat on all four sides and tighten slowly. Guide the knot towards the lanyard as close as you can get it. When it is tight enough cut the remainder cord. You can burn the ends of the paracord with a lighter to make sure it won’t fray.

The finished lanyard should look just like the one pictured above. You can use this lanyard for knives, machetes, balisong, and anything else you don’t want to lose. Read about the pocket knife that was featured in the photos.