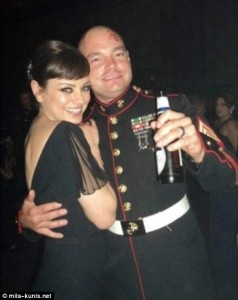 Mila Kunis with SGT Moore at the 2011 USMC Ball

The 10th of November 2015, will be the 240th birthday of the United States Marine Corps. On the 10th of November 1775, the Second Continental Congress raised the Marine Corps to serve under the Navy for the Revolutionary War. It was at Tun Tavern in Philadelphia where the first Marines were recruited for service.

The Marine Corps Ball is a modern way to commemorate the service and history of the USMC. It usually involves a cake cutting ceremony that is outlined in the Marine Drill Manual. There is also a dance, formation run, uniform pageant, and maybe a mock battle, sporting events, and music performance on some bases. Also, every year, Order 47 is reprinted. It states:

What really goes on at the Marine Corps Ball? Well, I am not a Marine but have friends who are. What they tell me is this: anything can happen during the Ball. (See the $30 folding knife that will outperform $200+ knives). For example, do you have a hot First Sergeant that you’ve always been wanting to hook up with? Well, during the ball, such magic can happen ;-).

Justin Timberlake’s blog stated that he was moved by the event and was very proud to be invited to such a great tradition. He really appreciated the kindness and generosity that the Marines gave him as well as their defense for Freedom. Mila Kunis also enjoyed her time at the ball. She stated how she enjoyed the USMC’s rich history and traditions. 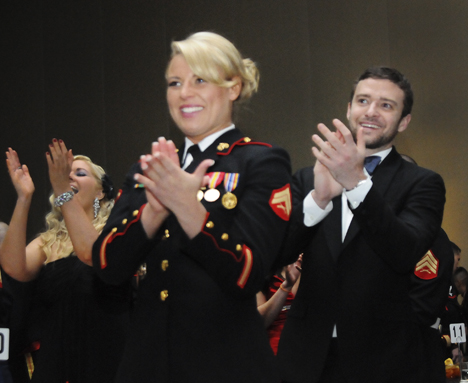 JT and Corporal Kelsey DeSantis at the 2011 USMC Ball

Even if you are not on a base that has an elaborate ball, many Marines and former Marines are still celebrating the special occasion with a small cake cutting ceremony and formation runs. Here in Boulder, the local veteran’s group is having a small 2-mile formation run for any service member who would like to run. The run will also follow with a BBQ (no cake cutting ceremony though). 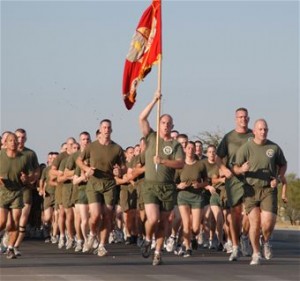 Over the years, there have been a great number of items that were developed by the Corps that has migrated into civilian life. For example, the Ka-Bar USMC knife is one of the greatest survival knives ever made. Kabar also makes great machetes.

In 2001, the Marine Corps started the Marine Corps Martial Arts Program which is a form of mixed martial arts. It involves: striking with the palm, fist, knees, and elbows; grappling; throws and takedowns; and knife fighting techniques. The MCMAP gave Marines more options to handle hostile but unarmed civilians. It also built up the esprit de corps.

The Army also celebrates their birthday on Flag Day but the occasion is not as grand as the Marine Corps. What occurs on most bases is that the cooks prepare a cake for dinner in addition to the dinner menu. The cake is decorated and an announcement is made about the history of the US Army.

How do I know this? Well, guess who was in the kitchen making the cake? Me.

(How to buy a balisong knife).

Peter Stec
Hey Knife Up gang!  I'm Pete and I'm just a small man in a small rural town who loves the outdoors as much as the other million internet users that cruise sites like Knifeup.com every day.  The difference is that I like to share what I know, and research what I don't totally know, so that YOU can have all the info you need to feel confident and prepared for all things outdoors related! And, for those who care, I have 42 years of wilderness canoeing and bushcraft experience in Northern Ontario and spend most of my Summers covered in mosquitos and fish slime, but hey, it's a lifestyle choice eh?