The Gerber LMF II Survival Knife is one of the most popular knives produced by Portland-based knife manufacturer Gerber. Survival knives are essential tools for outdoorsmen or anyone who spends a lot of time in the wilderness, as they enable them to be prepared to respond to a wide variety of emergency situations. The best survival knives can be used for everything from hunting and preparing game to digging ditches and making fire. A well-prepared outdoorsman can even use his survival knife to create a makeshift shelter as well as to deliver first aid. 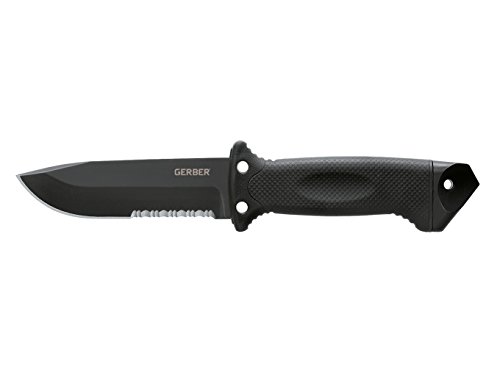 The company was founded in 1939 as Gerber Legendary Blades. Over the 70 years of its existence, the company has become known for its innovative designs combined with the best materials to create a line of outstanding blades for use by outdoorsmen and sportsmen, as well as professionals such as soldiers, firefighters, and law enforcement personnel. In addition to its line of knives for military, tactical, and outdoor use, Gerber also offers an Essential line of pocket knives and multi-tools designed to meet everyday needs and unexpected jams, as well as an Industrial line of durable multi-tools designed for use in worksites.

The Gerber LMF II Survival Knife is an outstanding blade designed by former military man Jeff Freeman to help deal with even the most extreme survival scenarios. The 10-inch knife features a five-inch blade made of 420HC stainless steel which is tough enough to cut through a seat belt or even break through a Plexiglas windshield. The edge of the blade is serrated to further increase its cutting power so that you can cut through virtually anything short of metal.

The over-molded handle is designed to prevent blisters when being used for long periods or under rough conditions. To further prevent user fatigue, the tang and the butt cap are completely separated, which absorbs shocks when the knife is being used as an improvised hammer. In addition, the LMF II has lashing holes that allow it to be tied to a handle so that it can be used as a spear. 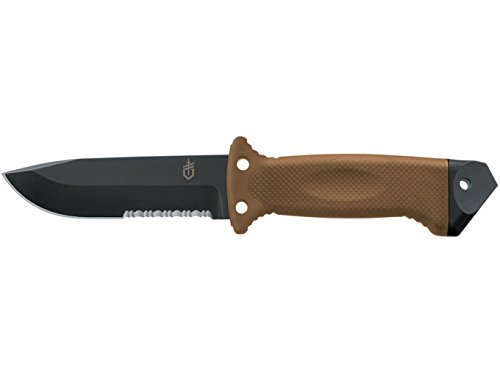 Average customer reviews for the Gerber LMF II Survival Knife is 4.7 stars out of five. An overwhelming majority of customer reviews gave the knife a five-star rating, praising it for its versatility as well as its durability since it can take a beating without breaking. The customers who have bought the knife have actually used it under survival conditions to test it and come back raving about the quality of the product. The only downside they can report with the knife is that it is rather bulky and heavy, but this is a personal preference and most users had nothing but good things to say about it.

If you are looking for a tough knife that can withstand hard use and can be used for a wide variety of jobs, the Gerber LMF II Survival Knife is one that you must have. It has a sharp, heavy blade and a specially-designed handle that helps prevent users from developing blisters if they use the knife roughly or for long periods of time. This survival knife is rated five stars.