The tanto was originally a short dagger or knife used by the ancient samurai class from Japan and it was primarily used for stabbing through an enemy’s thick armor during close combat. There is now a modern equivalent of this feudal-era weapon, the Cold Steel Master Tanto, which retains almost all of the design aspects of the original but with a couple of modern additions. The Master Tanto is primarily a tactical weapon, though Cold Steel claims that it can also be used in survival situations as well. However, is this replica of a weapon meant for the battlefield really useful when you are in the wild fighting for your survival?

Cold Steel was founded in the early 1980s, and ever since they started, they have been dedicated to making some of the sharpest and strongest blades the world has ever seen. For the last three decades, Cold Steel has always been at the forefront when it comes to cutting-edge innovations (literally) that have made a huge difference in the knife industry. 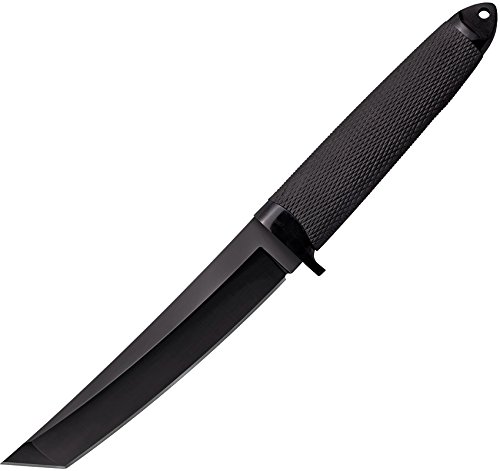 Some of their more famous innovations include the ergonomic and non-slip Kraton knife handles, the use of the very strong San Mai III blade steel, and of course, they were the first to introduce the tanto-style knife blades to the public.

6” VG-1 San Mai III blade – This means that you get a blade that has a very hard, high-carbon steel core sandwiched in between steel that has a much tougher, lower carbon content. This gives the blade the ability to hold a very sharp edge but still remains a bit flexible so it can withstand the stresses of actual combat.

Kray-Ex Handle – The Master Tanto’s flat, oval handle prevents the knife from slipping and twisting during use, making the knife very easy to wield during combat and in survival situations. It also has a redesigned guard that will prevent your hand from accidentally slipping onto the blade and causing serious injury. The handle is also made from Kray-Ex, a space-age material and another innovation by Cold Steel. This lightweight and durable material is said to not crack or rot, and is impervious to anything that Mother Nature throws at it.

Tapered, solid steel pommel – The pommel of the Master Tanto is designed specifically to focus the full force of a strike into a very small area. This is useful for incapacitating an enemy or in emergency situations where you need to break a relatively strong piece of glass (like the ones in vehicles). So when you get a Master Tanto, you actually get a knife and a blunt weapon rolled into one.

What Others Think of the Cold Steel Master Tanto

A lot of people are actually pretty impressed with their Cold Steel Master Tanto knives. They like its weight distribution, the feel of the handle, and the strength of its edge. There are some people, though, who believe that even though the Master Tanto is an excellent tactical knife, when it comes down to survival situations, it is not really the best. They say that the main issue that they have with the Tanto is the shape of the blade. Though it is very suited for stabbing and slashing an enemy, it is quite unwieldy when it comes to field dressing prey and cutting through shrubbery.  See the latest price on Amazon for the Master Tanto.

Although the Cold Steel Master Tanto is not specifically marketed as a survival knife (it is a replica of an ancient weapon, after all.) it does have plenty of qualities that somehow make up for its shortcomings.

So on a scale of 1 to 5 (5 being the highest), the Cold Steel Tanto scores a respectable 3.5, mainly because it is an excellent hand-to-hand combat knife, but not a very good one for survival purposes.

Advantages and Disadvantages of a Hawkbill Blade Knife.

There are different tools and equipment that we typically require to use in various situations in our lives. Knives are one such type of tool that is essential for multiple purposes. Whether for general kitchen usage or survival purposes, you need to select a knife that is ideal for the given situation in which it ... Read more