Before we jump into the SL Pro2, here are a few cool alternatives that may suit you better!

Here’s the RoverTac Pocket Knife which is a very well-rated multi-tool (not unlike a Leatherman) but unlike a Leatherman, it features its knife blade as the main feature.  Much like the SL Pro2, the RoverTac has a black-coated serrated blade and black handle.  It has a locking mechanism (lots of really cheapo multi-tools do not – I know ’cause I own TWO!!  Live and learn I guess!) and a durable nylon pouch.  The bad news is that it does not come with a flashlight like the Pro2, but in place of that, it gives you pliers, bottle opener, wire cutter and a whole lot of screwdrivers.  In addition to a Torx bit, it gives you another 9 bits for everyday use.

As far as the lack of flashlight, I’d suggest getting a good quality one as a separate unit anyway.  We strongly suggest the FENIX E18R rechargeable light. 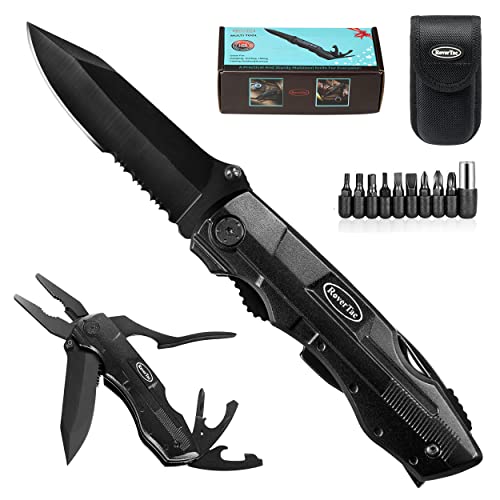 The Tool Logic SL Pro2 is a 3-inch serrated outdoor and survival knife. It is compact and has very interesting features for a pocket-size tactical blade. It is fairly similar to most outdoor knives in terms of size and basics, but it packs these other surprising features. This Tool Logic SLP2 review will discuss the manufacturer, features and benefits, as well as ratings.

The Manufacturer and Features of SL Pro2 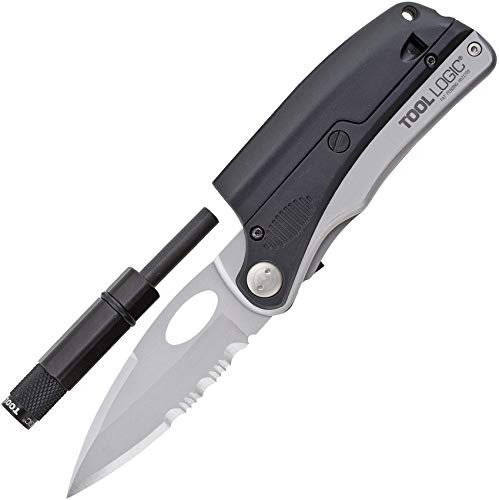 Tool Logic is an American outdoor brand whose products are known for its credit card sizes. They started making multi-purpose tools in 1994 and eventually included survival knives and other gadgets, all of which are equally aimed to provide consumers with preparedness. Along with several lines of compact tactical knives, Tool Logic released the SL Pro 2 in 2009. Its 3-inch body holds these main features:

Details of the Body and Blade

The 3-inch folding knife is typically multi-functional. It features a solid Zytel frame and can easily be opened by just one hand, thanks to its liner-style lock. The steel body frame is attractive and compact but seems slippery. For that reason, the SL Pro2 features a belt or pocket clip to keep the knife close to the body. It also has a lanyard hole to keep visible if kept in a bag. The blade is relatively razor-sharp and is 3 inches in length—suitable enough for most outdoor adventures. The blade is serrated and can open cans and carve through meat and small branches.

The SL Pro2 also has a built-in signal whistle. It is particularly loud given its smallness. There’s a flashlight at the side of the body that’s immediately noticeable. It features an LED light which is quite bright. However, it’s powered by four 1.5V button cell batteries which are often considered pricey. The flashlight contributes to the weight of the knife and might be a nuisance for some or ideal for others. The SL Pro2 only weighs at 4.3 ounces so the difference is noticeable. Regardless, the LED flashlight is detachable, though (if preferred), and for a reason. At the opposite side of the flashlight, hidden in the knife’ sleeve, is a magnesium alloy fire starter.

The Fire Starter Feature’s Appeal to the Market

Now this key feature caught on immediately with a great portion of the market. Unlike many compact and survival knives, most of which are twice its size, the SL Pro2 comes with one obvious but apparently overlooked survival necessity. The magnesium alloy “stick” shares almost half of the LED flashlight’s body and fit snug into the back portion of the knife’s body. If anything, this feature stands out the most because for users, it means not having to bring matches or lighters that would simply get wet in the rain. The magnesium alloy can be struck against any rough surface for making fire, but for greater convenience, it can be detached and struck against the serrated edge of the blade. In addition, the entire SL Pro—yes, including the LED flashlight and fire starter—can withstand wetness from the rain. It is considered slightly waterproof but just for mild rain exposure and shallow immersions. Beyond that, it could very well stop working (particularly the flashlight and fire starter).

Bang for your Buck

We think you can get the best bang for your buck by snagging an older version of the Tool Logic models on Amazon.  Here’s the link to the Tool Logic SLPB1 Slpro1 Tactical, Multifunction Folding Knife.  Seriously, it’s a VERY good deal as long it’s online at Amazon!

Despite the fact that Tool Logic SL Pro2 is an old design, it is still getting excellent rates online. Most of the reviews highly favor the fire starter feature and the most common complaint about the knife is its apparently short blade. All in all, the compact multipurpose knife exceeds the functionality of most blades of its size and kind. For an average price of $30, it looks more sophisticated, durable, and probably provides more use.