Whoever said big things come in small packages just might have been referencing the new E18R by best Fenix edc flashlight. This pint-sized wonder was released in October 2018 and we’ve put it through its paces.

The E18R Rechargeable fenix LED flashlight features wireless charging, powerful lumens, built-in intelligence and it weighs less than a Zippo.  But does it have what it takes to become an EDC favorite? The results are in and our performance review starts now…

While the fenix EDC flashlight market is awash with competitors claiming ever higher lumens, Fenix managed to pack in large-scale usability in a torch the size of a 12 gauge shotgun shell, and I’m not even talking about a magnum shell!

The dimensions of this light are surprising, given its performance, and measures in at 2.37” long and .83” in diameter. This torch comes with a lanyard, a key ring, and a spare o-ring.

The entire system, including the battery and the lanyard, weighs a scant 1.87 ounces. 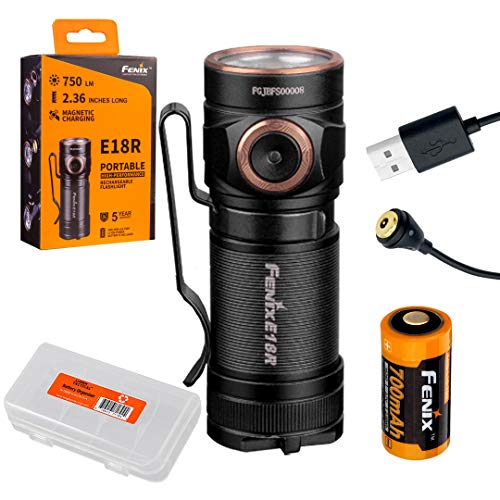 “May it be a light to you in dark places, when all other lights go out.” J.R.R. Tolkien

The E18R boasts a very useable 750 lumens in Turbo mode for a few seconds, then drops to 400 lumens for approximately one hour.  There are 4 more settings as well.  Low will get you 5 lumens for 70 hours, medium will produce 30 lumens for just under 14 hours, and high is 150 lumens for 2-½ hours.  Finally, there is a strobe feature that emits 750 lumens, the same as Turbo.

These are very respectable run times, considering it is powered by either a CR123A, or the included rechargeable 16340 battery.

I set up my own lumen test using a Urceri MT-912 Light Meter.  I set up at 2 meters and measured 4.5 lumens for low, 37 lumens for medium, 178.5 lumens for high, and 751.3 lumens on turbo.  These were pretty much spot on with what Fenix says this torch will emit, given a few percentage points for error.

Wireless Charging for the Win

In my opinion, the charging function is the real winner here.

A magnetic USB charger is included and attaches to the side of the torch, opposite the switch. The connection is quite strong, so you don’t need to worry about it disconnecting before you’re ready.

With wireless smartphone charging being so popular, look for other companies to begin entering the wireless charging market for their torches as well. If they use Fenix’ system as a guide, they can’t go wrong.  I’m completely impressed with the convenience and reliability of the charging system. They certainly got the engineering right on this one.

Up to the Task

When Fenix told me they wanted to send me their best fenix EDC flashlight, I had imagined the standard 18650 battery-equipped rechargeable light.  When the E18R arrived, I have to admit to letting loose a bit of a chuckle. As it turns out, I was meant to eat that laugh.  This light can stand toe to toe with its larger brethren and do it with advanced technology, long run times, and at a feather light weight.

I have carried the E18R daily for 6 months, and I have used it in every situation that I could think of.  I’ve checked breaker boxes, looked for rain damage in my backyard shed, illuminated the floor to find lost items, and utilized it exclusively while camping, both for setting up in the dark and for navigating the woods to pick up some firewood.  This torch was up to every task and then some.

The base features a rare earth magnet and secures your E18R quite well to ferrous surfaces.

The life of the battery far exceeded my expectations and I rarely had to charge it. The battery life indicator on the power switch is a feature that I believe should be standard on all flashlights.

You can also lock the torch to guard against accidental power on in two ways.  First, double click and the light will flash twice, telling you it is locked. Double click again to unlock.  You can also physically lock the light by rotating the pocket clip to cover the on//off switch.  One thing to note, the pocket clip is not reversible, but I believe that is due to the physical lockout feature. In the end, it’s something I can live with.

Could it be Better?

There is very little not to like about this light, so if I were pressed to come up with any dislikes, I would say first, there were a few times when I was cycling through the levels and playing with the strobe where the light would lock up on me completely, requiring me to unscrew the back cap and then reinstalling it to get it working again.

I cannot tell you what I did to cause this, but it happened on more than one occasion.  It’s a simple fix and a problem that you most likely won’t encounter unless you’re just playing around with it like I was.  The other thing about this torch that could be a concern is its size. It is quite small and it doesn’t come with a nylon pouch.  It is, however, too large in my opinion to be a keychain light.

I carried it in my pocket, which worked, but I just couldn’t shake the feeling that I prefer having my Fenix EDC flashlight on my hip.  In fact, my normal EDC rig is a multi-tool with a ferro rod on one side of the pouch and an 18650 flashlight attached to the other side of the multi-tool pouch.  It makes it a modular system that is just “grab and go” instead of fumbling with multiple items.

One thing I would suggest is to go ahead and attach the included lanyard right away.  The small size and light weight of the light make it prone to slip from your hands if you’re not paying attention. With the lanyard attached, I had no problems at all.

I really do like this light and it will stay in heavy rotation in my EDC gear loadout. It is dependable and feels very solid.  The IP68 rating means I won’t have any problems if I drop it or use it in the rain.  The pocket clip allowed for it to be attached to a ball cap, so it can turn into a headlamp if necessary.

Again, I come back to the charging system, which is the best I’ve seen bar none. I truly believe this is the future of flashlights and it is a welcome innovation.  Every time you unscrew the light to charge the battery, you’re putting wear on your o-ring and opening your light to the elements. The magnetic charge eliminates that.  The magnetic base is handy as well if you do a lot of home repair like I do.

All in all, this is an excellent Fenix EDC flashlight that I will be using for quite some time.  I would not hesitate to recommend this for someone looking for a lightweight, dependable torch that they can just throw in their pocket and forget about.  It is another great product from a great company. You can purchase this light from BladeHQ.com, or direct buy Fenix flashlights.

At the time of writing this article, it is selling on BOTH Amazon and BladeHQ for $64.95, which is a bargain considering all that the Fenix E18R has to offer.