In November 2006, the National Institute of Standards and Technology with help from the University of Colorado, Boulder unveiled the world’s smallest knife: the nano knife made of nanocarbon. In an attempt to produce a series of nanotools such as nanotweezers, nano bearings, and nano-oscillators, they have also produced a nano knife. 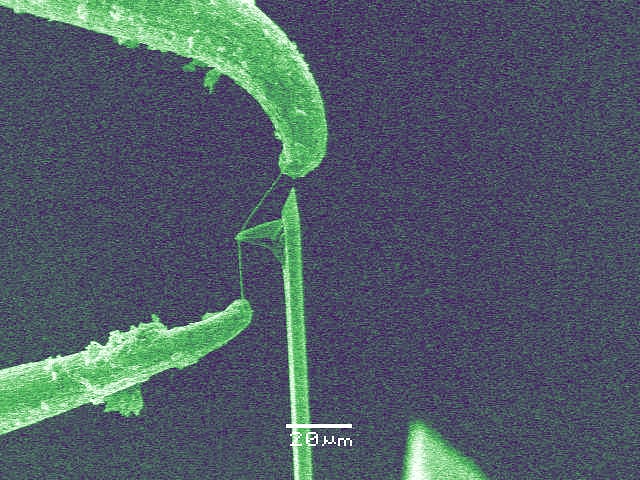 The world’s smallest knife. (It’s that little, tiny wire between the two round horn-like thing).

To further understand cellular biology, scientists wanted to be able to cut smaller sections of cells. Older technology involved glass knives that often times damaged edges as well as limited the size of the cut. Carbon nanotubes are only a few atoms wide and allow for much more precise division of cells.

How it was Made

The nano knife was produced by growing a carbon nanotube in the lab. It was then welded to two tungsten needles. The edge of the nanotube works as a precision surface with which to cut.

Initial testing found that the weakest part of the nano knife was the welding that held the nanotube to the needles. The team has gone back to the drawing board to determine the best way to produce the nano knife.

Other Uses of Carbon Nanotubes

A carbon nanotube is a cylinder made of carbon atoms. Carbon is found in ash as well as diamonds. The nanotube structure allows for very strong ropes. It is believed that a carbon nanotube string can be used to make a space elevator. Because of its tension, the nanotubes will not snap when extended out way past the earth’s atmosphere.

If you enjoyed this article, check out our review of the best machete, the best bowie knife, and the best dive knife.

Peter Stec
Hey Knife Up gang! I'm Pete and I'm just a small man in a small rural town who loves the outdoors as much as the other million internet users that cruise sites like Knifeup.com every day. The difference is that I like to share what I know, and research what I don't totally know, so that YOU can have all the info you need to feel confident and prepared for all things outdoors related! And, for those who care, I have 42 years of wilderness canoeing and bushcraft experience in Northern Ontario and spend most of my Summers covered in mosquitos and fish slime, but hey, it's a lifestyle choice eh?