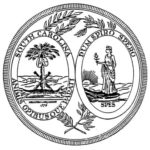 South Carolina has one of the least restrictive weapons laws when it comes to owning and carrying knives. The laws specifically mentioning knives is practically non-existent, and difficult to find. This article shows you the law and explains what it means in plain English.

South Carolina law explicitly excludes ìdirks¬î and ¬ìknives¬î from the conceal carry statute, unless they are used with the intent to commit a crime or in the furtherance of a crime. The conceal carry statute however, does cover, ¬ìany other type of weapon, device, or object which may be used to inflict bodily injury or death¬î. Thus, while it may begin legal to carry a dirk or knife concealed, if the carrier were found carrying concealed under certain circumstances, it might become illegal.

(A) A person carrying a deadly weapon usually used for the infliction of personal injury concealed about his person is guilty of a misdemeanor, must forfeit to the county, or, if convicted in a municipal court, to the municipality, the concealed weapon, and must be fined not less than two hundred dollars nor more than five hundred dollars or imprisoned not less than thirty days nor more than ninety days¬Ö..

¬Ö..(C) The provisions of this section also do not apply to rifles, shotguns, dirks, slingshots, metal knuckles, knives, or razors unless they are used with the intent to commit a crime or in furtherance of a crime.

In 2008, the South Carolina legislature amended its definition of ¬ìweapon¬î, deleting ¬ìa knife with a blade over two inches long¬î from it. The definition now reads:

‚Äúweapon‚Äù means firearm (rifle, shotgun, pistol, or similar device that propels a projectile through the energy of an explosive), a blackjack, a metal pipe or pole, or any other type of device, or object which may be used to inflict bodily injury or death.

By deleting the phrase ¬ìknife with a blade over two inches long¬î, the legislature did not quite make it legal to carry a knife concealed, as the conceal carry statute specifically excludes knives as a weapon covered by it, unless the carrier uses the knife to commit a crime or in the furtherance of a crime.

It is legal to own or open carry any kind of knife in South Carolina. It is legal to conceal carry any type of knife, so long as you do not use the knife to commit or aid in the commission of a crime.

Peter Stec
Hey Knife Up gang!¬ÝI'm Pete and I'm just a small man in a small rural town who loves the outdoors as much as the other million internet users that cruise sites like Knifeup.com every day.¬ÝThe difference is that I like to share what I know, and research what I don't totally know, so that YOU can have all the info you need to feel confident and prepared for all things outdoors related! And, for those who care, I have 42 years of wilderness canoeing and bushcraft experience in Northern Ontario and spend most of my Summers covered in mosquitos and fish slime, but hey, it's a lifestyle choice eh?