New York is a city dubbed as one of the least friendly cities toward knife possession. A knife is viewed as essential as much as it is viewed as potentially dangerous to people, hence the strict knife laws of the city. At present, the knife laws in the city are governed by the New York City Administrative Code.

What is Legal to Carry?

New York City, given the dynamics of high-density populations and differing ideas on what is acceptable or not, the current New York City administrative code assets that any knife carried openly is illegal unless

(a) it is being used for or transported immediately to or from a place where it is used for hunting, fishing, camping, hiking, picnicking or any employment, trade or occupation customarily requiring the use of such knife;”

In addition, it is also unlawful to carry a knife with a blade 4” or more if you are in a park, on the street or in any public location/building.

The danger of possession of an unwarranted knife is further elaborated under the legislative findings which led to the enactment of the law. Here are some of them:

What is the purpose of the law?

Because of the aforementioned effects of uncalled for knife possession, the legislative body of the said municipality deemed it fit to prohibit an unnecessary display of a knife in public places. Public places are exemplified as parks and streets, but clearly they are not meant to limit the term “public places” to only parks and streets. They cover all areas not within private ownership.

What are the knives banned in NYC?

According to the law, there is not much distinction as to which type of knife is illegal or not as it all boils down to whether the knife was exposed in a public place. However, under 10-133 Section (b) of the New York City Administrative Code, an illegal knife falling under any of the prohibited circumstances should have a blade length measurement of at least 4 inches or more.

What are the circumstances that make possession/carrying illegal?

As stated in the last paragraph, the circumstances surrounding the carrying of the knife is what makes its possession illegal. Under the New York City Administrative Code Sections (b) and (c), here are the circumstances which make carrying a knife illegal:

“b. It shall be unlawful for any person to carry on his or her person or have in such person’s possession, in any public place, street, or park any knife which has a blade length of four inches or more.

c. It shall be unlawful for any person in a public place, street or park, to wear outside of his or her clothing or carry in open view any knife with an exposed or unexposed blade unless such person is actually using such knife for a lawful purpose as set forth in subdivision d of this section.”

Exceptions to the Rule

d. The provisions of subdivisions b and c of this section shall not apply to (1) persons in the military service of the state of New York when duly authorized to carry or display knives pursuant to regulations issued by the chief of staff to the governor; (2) police officers and peace officers as defined in the criminal procedure law; (3) participants in special events when authorized by the police commissioner; (4) persons in the military or other service of the United States, in pursuit of official duty authorized by federal law; (5) emergency medical technicians or voluntary or paid ambulance drivers while engaged in the performance of their duties; or (6) any person displaying or in possession of a knife otherwise in violation of this section when such knife (a) is being used for or transported immediately to or from a place where it is used for hunting, fishing, camping, hiking, picnicking or any employment, trade or occupation customarily requiring the use of such knife; or (b) is displayed or carried by a member of a theatrical group, drill team, military or para-military unit or veterans organization, to, from, or during a meeting, parade or other performance or practice for such event, which customarily requires the carrying of such knife; or (c) is being transported directly to or from a place of purchase, sharpening or repair, packaged in such a manner as not to allow easy access to such knife while it is transported; or (d) is displayed or carried by a duly enrolled member of the Boy or Girl Scouts of America or a similar organization or society and such display or possession is necessary to participate in the activities of such organization or society.

Knowing how important knives are, the legislators provided some exceptions to the rule, such as when the knife is carried in a public place for necessary purposes i.e. official duties, carried for sharpening or repair, etc. All the justifying circumstances for carrying a knife in a public place are enumerated under Section (d) of the said law.

e. Violation of this section shall be an offense punishable by a fine of not more than three hundred dollars or by imprisonment not exceeding fifteen days or by both such fine and imprisonment.

In sum, the illegality of carrying a knife all boils down to whether it threatens the public by the mere fact of its exposure. However, such public threat is assumed whenever the knife is exposed or carried in a public place without lawful cause. There are so many lawful causes for bringing a knife under this law which makes it more tolerant than other laws.
The penalty for its violation is a fine of not more than $300, imprisonment not exceeding 15 days, or both.

If you’d like to know any loopholes or items of concern regarding knife laws in your state, we strongly suggest Evan’s book “Knife Laws of the U.S.”  Evan is  one of the most respected legal authorities in the nation on the topic of knife law. As an attorney, he has fought nationally for knife rights and has successfully defended honest citizens charged with knife crimes. He has authored an extensive list of books and magazine articles and has appeared on CNN, Fox News, NPR, and many other news outlets. He lives and practices law in Eatontown, New Jersey. 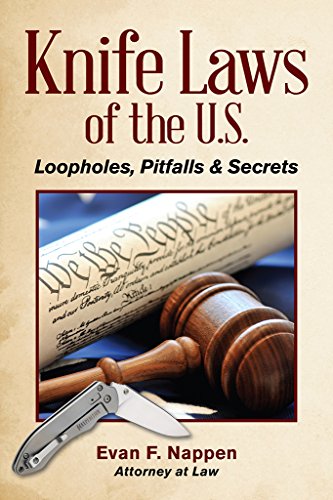