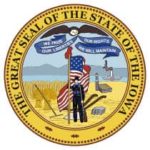 Iowa has very, very relaxed policies on owning and carrying knives. However, the state made it very confusing with big legal words. This article will translate Iowa Knife Laws from legal speak into English.

Only ballistic knives are outlawed in Iowa law.

A â€śdangerous weaponâ€ť is any instrument or device designed primarily for use in inflicting death or injury upon a human being or animal, and which is capable of inflicting death upon a human being when used in the manner for which it was designed, except a bow and arrow when possessed and used for hunting or any other lawful purpose. Additionally, any instrument or device of any sort whatsoever which is actually used in such a manner as to indicate that the defendant intends to inflict death or serious injury upon the other, and which, when so used, is capable of inflicting death upon a human being, is a dangerous weapon. Dangerous weapons include but are not limited to any offensive weapon, pistol, revolver, or other firearm, dagger, razor, stiletto, switchblade knife, knife having a blade exceeding five inches in length, or any portable device or weapon directing an electric current, impulse, wave, or beam that produces a high-voltage pulse designed to immobilize a person.

It is illegal to conceal carry a knife over 5 inches in blade length in Iowa. Over 8 inches and you are in even worse trouble. Open carry is not restricted.

A knife under 5 inches can still count as a dangerous weapon and can still fall under this concealed knife ban if the use makes it dangerous. In the case of State v. Caballero, the courtâ€™s unpublished opinion stated that the knife was a concealed dangerous weapon even though it was under 5 inches because of how the defendant was acting. Unpublished opinions are not precedence which means that it wonâ€™t affect the law but this gives you an idea of what courts have determined â€śdangerous weaponsâ€ť to mean in the past.

Balisong knives, also called butterfly knives, are dangerous weapons in Iowa. The state has found that balisongs were designed for fighting and had no utility uses. Even if a balisong is under 5 inches, it would still count as a dangerous weapon. (The court misinterpreted the facts because balisongs were originally designed as a utility knife in the Philippines.)

An offensive weapon is any device or instrumentality of the following types:
[â€¦] 5. A ballistic knife. A ballistic knife is a knife with a detachable blade which is propelled by a spring-operated mechanism, elastic material, or compressed gas.

Any person, other than a person authorized herein, who knowingly possesses an offensive weapon commits a class â€śDâ€ť felony.

It is illegal for you to own a ballistic knife in Iowa. Besides that, there are only limits to concealed carry of knives. There are no limits to open carry.

It is illegal for you to carry concealed a balisong, dagger, stiletto, razor, switchblade, or knife with a blade over 5 inches. Other knives that are less than 5 inches can still count as a dangerous weapon if you use it in a dangerous way.

Note that this is not legal advice and there is no client-lawyer relationship here. Also note that county laws will also come into play and you need to look those up to get a clear understanding of knife laws around your area.

If you need legal advice, talk to a real lawyer.