How Sharp Should a Machete Be?

I am an outdoors kind of girl who loves the wilderness, fresh air, and getting dirty. Machetes seem to me to be the kind of knife that someone would use in that sort of situation.

When you think of a machete, the first thing that comes to your mind is probably Paul Bunyan whacking at trees and bushes to clear a path for himself. Or maybe you picture real live fruit ninja at a family reunion like I do because we actually did that once (which was very memorable, by the way.)

Either way, machetes are fearsome, you probably have one, and now you want to know the ins and outs of it.

You don’t want too thin of an edge, but still sharp enough that you could shave with it.  However, you want the angle of the sharpened part of the blade to look like on obtuse triangle to maintain the blade’s strength since a machete blade is mainly used as an impact tool.

After some research, I found some pretty cool things that may interest you.

How do you test a machete’s sharpness?

Aside from cutting something to test the sharpness of your blade after you sharpen it, you can also look for tiny hair-like metals coming out from the opposite side of the blade from which you just sharpened. If you see little hairs popping out, you know it’s sharp enough. However, many people have difficulty getting their knives that sharp with a simple at-home kit. Having them professionally sharpened is a much better route if it happens to be an option for you.

A few common mistakes to avoid for the DIY knife sharpener:

Some other tidbits that make machete’s a little cooler than other knives are these:

What are machete blades made of?

Stainless steel and carbon steel and the most common types of material used to make machetes, which happens to be one of the four toughest metals in the world — the other three being tungsten, titanium, and Inconel. That is why many of the common household cutting tools such as kitchen knives and scissors are also generally made of stainless steel.

How do I know what kind of metal my knife is made out of?

To give the quick answer, there is generally a small inscription on the side of the blade that tells you what kind of metal from which your knife is made. But if for some reason that is not the case, one way to figure out what type of metal your knife is made of is to test its hardness. Hardness is a variable term, but for our purposes, we are going to use it to see if your knife is made of stainless steel.

The way it works is that a microscope looking machine holds a piece of metal in place while a cone-shaped tube with a diamond at the end to cut the metal lowered down to press onto the metal until an indentation is made. The size of the indentation can then be converted to a number, called the Rockwell C-Scale number. A typical grade of stainless steel is grade 304 on an “18/8′ piece of stainless. It is the hardness of most generally used household cutting tools such as scissors and knives.

This number gives you a baseline to compare results from different tests you might try to see what kind of metal your machete is made out of. But since most people don’t have a $2000 Rockwell testing machine lying around at home, you could also try out a local knife shop, pawnshop, sporting goods store, or welding place that might be able to use a Rockwell testing machine to test the metal for you.

Why would someone want a machete?

So why choose a machete over some other epic knife? First of all, it is a one-stop-shop multipurpose tool. You can use it for hunting, fishing, farming, building, processing food, or make other types of tools with a machete. The tip of a machete can be used for drilling, scraping, stabbing game, or opening cans. The leading edge can be used for clearing trails of bushwhacking.

The middle relief is good for slicing and dicing, even if it is only for human fruit ninja. And the bottom part of the machete is great for hammering. It’s a blunt edge close to the handle so that it’s easy for striking and smashing while maintaining control. Overall, I’m pretty sure if I were stranded on a desert island and could only bring one item with me, it’d be a machete.

If you’re looking for something that you know no-one else has in your circle of friends/colleagues, you can check out this FISKARS machete from Amazon.  It’s not an exotic company, but it sure is a unique tool that can look pretty intimidating.  It’s a machete Axe! 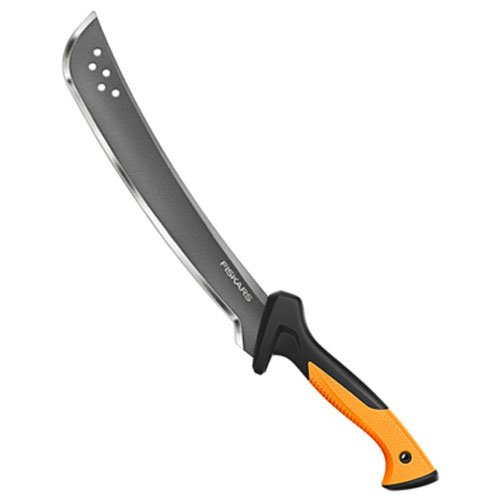 4 thoughts on “How Sharp Should a Machete Be?”