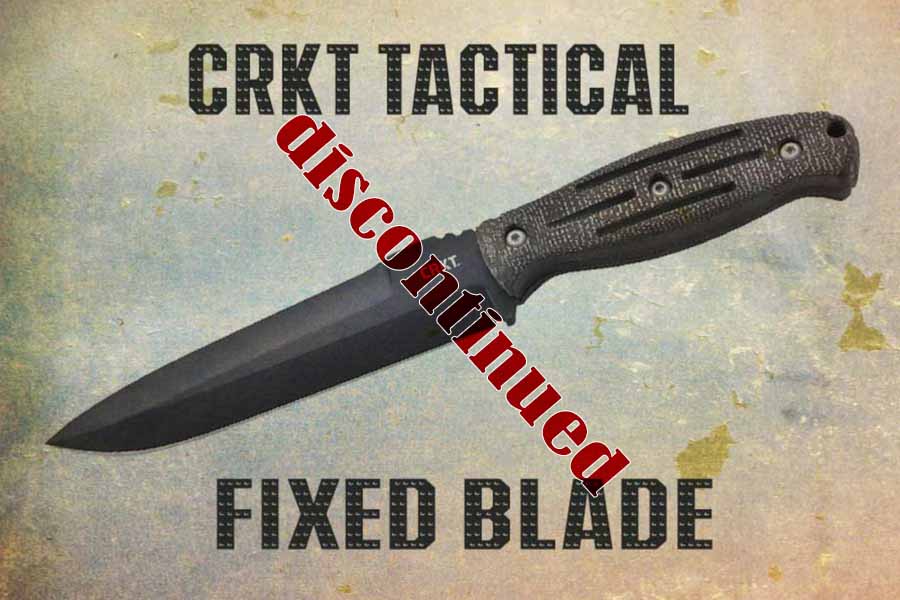 Currently, the Ultima is out of stock at Amazon and BladeHQ, but they both have plenty of CRKT tactical knives.  If you’d like to read more about the Ultima (maybe you have one or are thinking of getting one second hand?), we have the info on this page.  Enjoy!

However, in our attempt to help you maximize the efficiency of your research, we’ve gone ahead and researched a VERY good alternative and our best recommendation for a CRKT Ultima alternative.

Introducing the Gerber StrongArm Fixed Blade Serrated Edge tactical knife.  It’s almost exactly the same size and length as the Ultima.  It’s also full tang and it’s made of 420HC steel and it features a striking pommel at the handle’s base.  The sheath is MOLLE compatible and here’s the kicker;  It’s MADE IN AMERICA!

The Ultima lines of tactical knives are large and durable and have various configurations. If you look closely, the blade has a Stone Age look. The handle is both ergonomic and is designed to provide the ultimate no-slip grip. This CRKT Ultima review will look at the manufacturer, knife’s features and benefits, as well as give you a quick summary of consumer reviews. 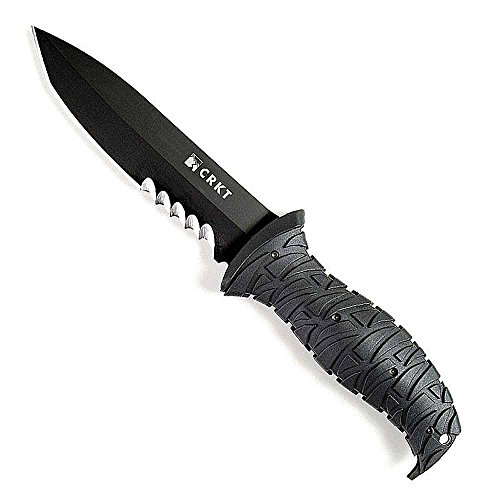 Columbia River Knife and Tool is the brainchild of Rod Bremer. The company has been making custom-made knives since 1994. CRKT partners with some of the best knife designers to come up with custom-made cutters for everyday use.

Salient Features of the CRKT Ultima

The Ultima was designed by Michael Martinez as a tactical knife. The primary purpose was to provide the user with a fixed blade knife that allowed for optimum contact points with the widest type of grip angles and holds. Simply put, however you hold it, slipping will not be an issue. In fact, Michael Martinez claims that it can achieve optimum grip based on 22 out of 23 contact points.

There are several redesigns of the Ultima. Some variants have 4.95-inch blades while some have 6.75-inch blades. The knife edge is spear point. The business end can be razor-sharp, serrated, or a combination.

It’s not a “pretty knife”; the handle is just way out there. However, once you actually hold it and play with it, you realize how “sticky” it is (in a good way). It’s one thing for a knife to handle well on initial contact. It is another thing for you to feel in control when you transition (one-handed) from one grip to another. This knife effortlessly does both.

The butt pry tip is also a welcome design. Some experts think it should have been bigger, but like the knife itself, it gets the job done.

The only issue with the knife is a slight imbalance. The handle portion is a little bit too heavy for the knife end. The blade could have been thickened or the handle lightened.

The sheath was designed almost flawlessly. First, once you sheath the knife, it doesn’t come out accidentally even if you forgot to strap it. Second, there are multiple carrying configurations. Third, the paracord is a nice touch. The only issue with this sheath is it’s too bulky. A second, smaller sheath would have been welcome.

Most consumers like to use this knife, wet and muddy. The handle grooves are always true to grip. The light bead-blast finish of the blade and the stainless portion of the handle are a beauty to look at.

The biggest concern for most consumers is the thinness of the blade. The Ultima 5 and 7 is 0.18 inches thick. It could have been made thicker, considering the weight of the handle.

The author gives this knife a rating of 4 out of 5 stars. The only issue is the thin blade, but when one considers that this is supposed to be a tactical knife, it is more an issue of how heavy the handle is.