A parang machete is a machete from Malaysia and Indonesia. The jungles of Malaysia and Indonesia there are filled with woody vegetation and a Latin or kukri machete will simply not do well–they can’t handle wood very well. The Parang was designed specifically to handle thick woods. If you live in the woodlands, a Parang is the right type for you. However, which make and model should you get?

This article will review 3 top selling parang machetes, talk about what to look for in a machete, and recommend you the best parang machete.

What to Look for in a Parang Machete 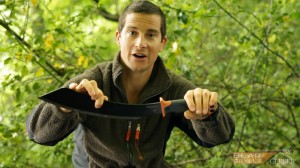 A “celebrity endorsed machete” must be an oxymoron

I’m not a big fan of celebrity endorsed items and this parang is an example of that. A lot of people online say that this parang is great but, after close review, I found out that the parang is not a full tang parang. After using this for awhile, the blade will wobble from the handle. Not a good sign in my opinion.

Other Bear Grylls products have had very bad reviews. His survival knife totally sucked and a lot of reviewers online mentioned how it fell apart after a week of use. Gerber also posted a recall in Q4 2012 for certain editions of this knife. Apparently, the tang wobbled so much that some blades went flying across the room during use. WOW!

Aside from that, everything else about the knife is great. The blade is very thick and the handle grips like Spiderman. They used some new-age plastics in the handle that I enjoyed a lot. This knife would be great to cut wood up with but, with the weak tang, it is a huge no-go for me even though the knife is only $40.

Zombie killer for sure.

This machete has a cheap plastic handle but, however, it does have a full tang. You can compensate for the cheap handle but tying 550 cord around it as many survivalists online have done. The 550 cord can also be used in emergency situations where you need some rope. Also, some people stated that the blade is not sharp but, for $14, what do you expect? You can buy a cheap sharpener elsewhere.
In all, this knife is OK. Super cheap but it does have a great blade and a full tang. I recommend this knife. 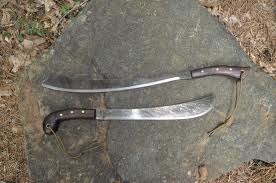 This machete rocks! It is only $10 more than the Bear Grylls machete but is just plain awesome! It comes with a high-quality leather sheath (whereas the Bear Grylls came with Nylon). This is good if you want to carry it around in the woods but it is bad if you are going to the jungle (leather sucks in humidity). It comes razor sharp (whereas the other 2 knives sometimes come dull). And it also features a 17.5-inch blade! WOW, that is HUGE!
It has a full tang that extends to the base of the handle and I’m quite surprised that I got such a cool and good knife for only $50. You can check it out here

So, we reviewed 3 popular knives. The Bear Grylls is an OK knife that is a little over-hyped by his celebrity endorsement. Some Bear Grylls models are dangerous :/. The cheap Cold Steel knife is good but on the cheap side (you do get what you paid for). However, if you are looking for a toy, I would totally recommend the Cold Steel. The Condor knife is $50 but, if you are going to hike, camp, or use a machete a lot, you might as well get one that lasts and the Condor will last a long time. You can look at prices here.

Parangs are very good survival items. Paired with a trusty survival knife, you’ll have yourself a great couple. A survival hatchet is also a good replacement for a parang if you won’t be cutting a lot of leaves.