Table of Contents
The Origins Behind the Tanto Blade
Advantages: Where the Tanto blade Excels
Drawbacks: Where There’s Room for Improvement
Why a Tanto Blade Over Others?
Popular Tanto Blade knives
Conclusion 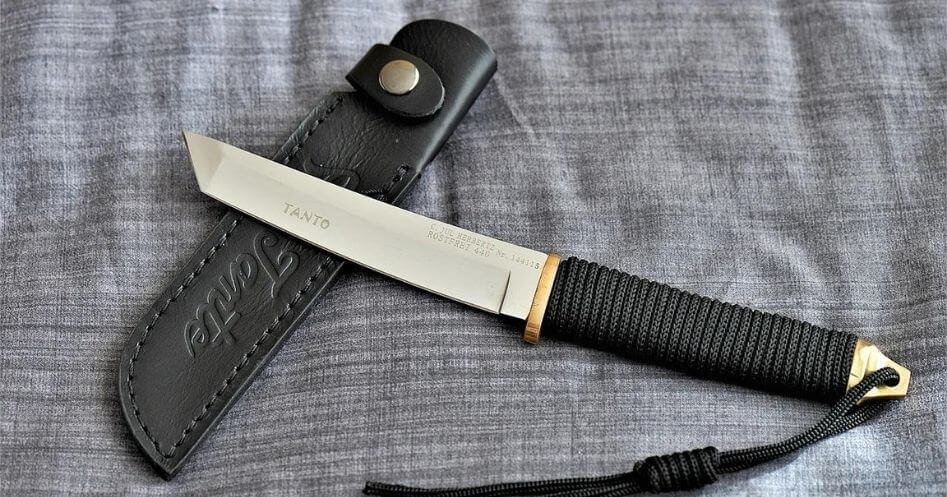 When it comes to the world of folding knives, there are countless styles and brands to choose from. The blade itself is no exception. It’s one of, if not the most important choice to consider when picking a folding knife.

There are many different shapes and styles, each having its advantages and disadvantages.

Choosing the wrong tool for the job can end up having disastrous results. Would you ever choose a hammer to insert a screw, or pliers to cut down a tree? Of course, you wouldn’t, which is why I am here to help you choose the right tool for the job.

Of the various options in the world of blade shapes, the tanto-style pocket knife has become very popular in the designs of many folding knives in the modern-day for various reasons.

In this article, you’ll understand the advantages, disadvantages, and general information about the tanto blade shape.

The Origins Behind the Tanto Blade

The “Tanto” is a blade shape known for having a sharply angled tip and very little belly or curve to the main edge. The tanto blade was originally a shorter sword (roughly 6in- 1ft) but used more like a knife due to its smaller size.

The tanto design dates back to the Heian period (794-1185) in feudal Japan. It was used in close combat situations as the blade shape allowed it to excel in penetrating armor.

The tanto blade would later evolve into the Katana and other extended weapons as a longer reach became more of a priority in battle. The design would eventually become less popular in battle as swords, in general, were slowly phased out due to the invention of gunpowder and subsequently firearms thereafter.

As firearms became the primary weapon of war, the tanto blade was still around but was relegated to a more ornate role rather than actual use. However, the tanto blade shape has made a resurgence in recent times becoming a popular folding knife blade shape used most notably among the armed forces, and law enforcement officers.

Advantages: Where the Tanto blade Excels

As mentioned earlier, the main advantage of the tanto blade shape is its capability of penetration, but also helps other things

The design of the tanto blade has a triangular tip and has extra steel reinforcing its point giving it structural stability and capability to pierce or penetrate objects other common blade types may not be suited for.

Having a reinforced tip also makes a tanto good at prying. While prying with a pocket knife is never recommended nor frequently needed, it is nice to know a tanto tip can be applied in such a situation should you find yourself in a pinch.

The triangular tip of the tanto blade enables it to have a secondary tip alongside the initial point of the blade. This can be used for more precise cuts almost like a scalpel.

Another subtle but heavily influencing aspect of the tanto blade shape is the pure aesthetics when looking at the knife. With the combination of having foreign Japanese origins and taking its place among many people in law enforcement and the military, it’s undeniable that the tanto has taken on a more “tacticool” persona.

This atmosphere that surrounds the knife bolsters it’s already expansive reputation and ends up drawing even more people to it despite themselves not necessarily playing a “tactical” role in society.

One last advantage that comes with the tanto blade would be the process by which it is sharpened. Traditionally, with curved blades such as drop points or clip points, one would have to slide the blade across their sharpening stone, rod, strop, etc, while having to slightly angle the blade as they approach the curve to maintain consistency throughout the knife.

Performing this process incorrectly can cause a blade to have some parts duller than others, and possibly ruin a blade grind if the mistake is big enough.

When sharpening a tanto, however, the lack of belly or curve on the blade almost completely removes the possibility of making this mistake. Since the blade itself would likely be a straight edge, sharpening would only require one (or multiple) straight slides across a sharpening system without having to worry about angles or much blade manipulation beyond the actual angle of the cutting edge.

Drawbacks: Where There’s Room for Improvement

There are definitely certain advantages to having a tanto blade that you won’t get with other traditional blade shapes, although some of these advantages can be a double-edged sword (pun intended).

1. “Aggressive” Aesthetics Can Be Intimidating For Others

The first disadvantage to the tanto design is ironically the aesthetics. Now you’re probably thinking to yourself “you just said the aesthetics were a good thing, now they’re bad?”. Yes, aesthetics are both a good and bad thing.

While the tactical and “aggressive” look of the tanto blade may be appealing to you, it may startle those around you who may not be as enthusiastic about knives as yourself.

Depending on where one lives, many laypeople become off-put or outright intimidated when they see a knife of any kind. Adding on a more aggressive blade shape should you choose to use it in public would only add fuel to the already existing fire.

Due to the abrupt angle of the front edge where a curve would normally be, the very tip of the blade becomes more like a secondary cutting edge rather than a single curved edge. This is where the consideration lies.

Some people find it to be a tedious process because sharpening a tanto blade can feel more like having to sharpen 2 smaller knives.

Again, this could be a disadvantage, but it is more so just something to keep in mind when considering how often you sharpen your knives and/or your sharpening skills as a whole.

Finally, the last disadvantage to having a tanto blade would be cutting performance. Since the blade design has very little belly/curve to the main edge, it sacrifices cutting ability in exchange for its penetrating power the shape is known for.

Rest assured, a well-forged blade even if it is a tanto can still have great cutting performance, but it is noteworthy to say that a tanto blade’s ability would not be as efficient at cutting as other popular blade shapes.

Why a Tanto Blade Over Others?

However, due to the clip point’s “slender” build, and extra-fine tip, the overall blade strength is relatively weak and poses a serious possibility of the tip breaking if pushed too hard.

The tanto on the other hand is not as versatile as the clip point blade, but what it can do, it does unparalleled. Having the extra material behind the tip as mentioned earlier makes it very good at penetrating at any level (relative to a pocket knife).

The drop point blade is known for its gradual “drop” from the spine of the blade, as it slowly approaches the knife’s tip. This allows it to have a stronger tip but is not as suited for penetrating as the aforementioned blade types. It also has a broader cutting edge which allows it to excel at long cutting sweeps ve more tedious tasks. This has made the drop point blade popular among hunters for jobs such as skinning games and so on.

The drop point and tanto blades don’t necessarily compete at one specific task, more so have their own specialties and can “cross over” into each other’s realms if needed. What matters most is what you would use your knife for. A drop point blade will be great at cutting and pretty good at penetrating, whereas the tanto will be great at penetrating and pretty good at cutting.

As previously mentioned, there are countless pocket knives to choose from, although there are some knives that come in tanto variants that stick out among the crowd.

The Spyderco Paramilitary 2 is a staple of the EDC world and well known throughout the hobby as one of the most popular designs out there. One Main drawback to the design however was the lack of tip strength that would come with the stock blade.

Verdict: The Paramilitary 2 tanto variant as the name suggests would make a good edc for those in police, and other paramilitary or military occupations. It can withstand hard use, while also not being too bulky in the pocket. The carry profile may still take some adjusting if you keep it in the same pocket as your wallet or keys

The Benchmade 940 is another widely respected and beloved knife in the EDC world. Often you may find the 940 and the PM2 duking it out for the title of best EDC knife of them all. While not having a traditional tanto blade design, the official blade shape is known as a “reverse tanto”. Nonetheless, it still has the same concepts, pros, cons, etc.

Verdict: The 940 is another great EDC for the everyman. It may also be good for those who carry a lot of things but may still need a cutting tool here and there such as an EMT or paramedic.

When it comes to choosing a blade design for a folding knife, there’s never a real right or wrong answer. Knives are like cars in that it’s what you do with them that matters most.

If you need to pull heavy loads across town daily, maybe a pickup truck is something you’d like to have. Or if you constantly commute long distances you may need something more fuel-efficient like a compact Sudan.

If you are in the military or a law enforcement officer, you will definitely find a tanto blade being useful more often than any other “standard” job in society.

That being said, if you’re not in one of those professions there’s no rule saying you can’t still own one.

There are many out there who buy a tanto-style knife simply because they think it looks cool, and that’s completely fine. When all is said and done, the choice is yours and yours alone; and no matter what choice you make, there is no definitive right or wrong. Just be mindful of the Advantages and Drawbacks of Tanto Blades.

Hopefully, this article was able to give you a better understanding of the tanto blade design and decide if it is right for you. At the end of the day, any knife is better than no knife, and worst-case scenario, there’s nothing wrong with buying more!