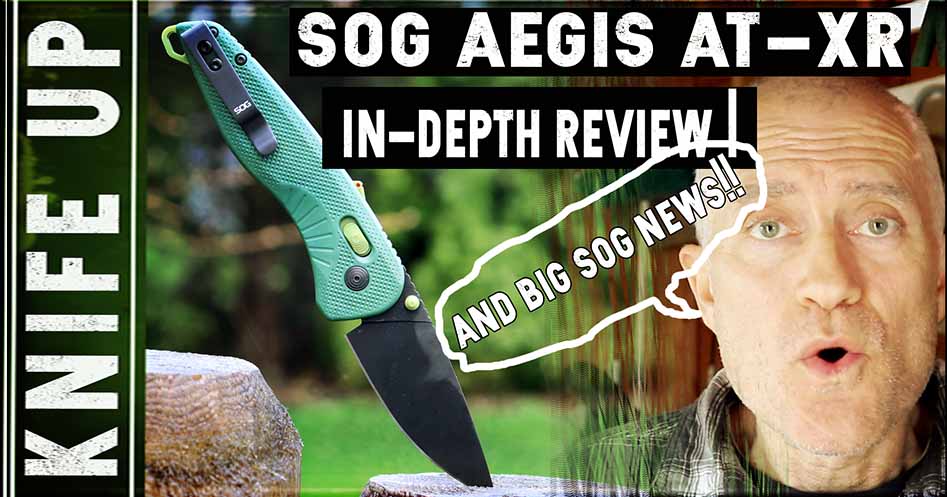 Why the weird face?  No reason!  Just a snapshot of me in the middle of my overly-descriptive prose while speaking of the re-branding of one of America’s iconic knife brands!  Speaking of SOG, let me be the first (hopefully) to let you know of some big news from SOG.

In late 2019, SOG began an ambitious re-brand to shed a different sort of light on their company and to change their brand from being the “best of the worst” to being high-end and able to compete with the world’s best sporting knives.

A bit of History

Headquartered in Lynwood, Washington, SOG is a company that prides itself on innovation and quality.  Well, the “quality” part is especially true these days!  The term “SOG” comes from a highly classified US special ops unit during the Vietnam war.  It was called the MACV-SOG.  The “SOG” part stands for “Studies and Observations Group”.  This elite group carried a unique combat knife into the jungles on covert missions.  Then, in 1986 a young knife designer named Spencer Frazer discovered some of the history of the MACV-SOG and was inspired by the knife.

As a result, the SOG Specialty Knives Company was established.  He reproduced the original SOG Bowie knife used by the special forces in Vietnam, as a tribute to the original knife and the special ops unit that used it.  The company grew from that point and the rest is more recent history.  You can check out their website for more! (sogknives.com)

We love the “iphone-esque” packaging!  Most knives come in a tiny box that barely fits the knife in its closed position.  The AT comes in a large box with the knife in the open, deployed position, and cradled in a molded plastic shell/cradle.  They’ve done a nice job in the packaging and marketing of this knife!

At over 5 ounces, this Aegis is no flimsy tool.  It features metal liners in the handle and a D2 cryogenically treated steel blade.  About half the blade is totally invisible (folded in the handle) when the knife is closed, so its profile is minimized when not deployed.  When the knife is closed and the safety lock is engaged, the blade can’t move or shift even a bit.  I know – I tried hard!  When the blade is deployed and ready for action, I was unable to move it side to side (zero play) or up and down.

It remained extremely sturdy in all directions.  While closing the blade, I was able to feel and hear an obvious friction/resistance which did not significantly impair the closing process, and in fact, I’m guessing that’s how it was engineered, so there’s likely no issue here at all, but it’s worthy to note this friction since it is not something I experience with any of my non-assisted opening knives.

Out of the box, like most blades, it’s extremely sharp. The tip is exceptionally sharp and aggressive.  It was easy for me AND for my kids (though I don’t endorse letting your inexperienced children play with it) to neatly and cleanly slice paper slivers onto the table top.   The overall look of the blade is not unlike a spyderco’s very distinctive blade shape and style but it has a bigger belly which is often better for skinning game.

It’s a more “substantial” knife than the Spyderco Paramilitary 2, but it is noticeably less expensive, which makes this a strong “buy”.

We like the black Titanium Nitride coating which not only gives the knife a sleek, mean and covert/tactical look, but also makes it stand out less in public (should you ever have to deploy it in public) since it won’t gleam with a sun reflection.  Even on a cloudy day, a silver blade can attract far more attention than a matt black blade and clip.

The blade features a non-adjustable thumb stud on either side which is a standard feature on most EDCs that don’t have a hole in the blade for a thumb grip to aid in opening.

There is gimping on both the blade and the handle.  The gimping is quite rounded and “worn” in its feel and it’s quite coarse (as opposed to fine like the Paramilitary 2).

The handle is quite comfortable (as opposed to the Spydero Paramilitary 2 which has sharp edges around the outside of the handle).  It’s also very “beefy” feeling since it has a substantial amount of steel inside the handle liners.  The texture is not as “grippy” as the Paramilitary 2, but I’m not sure that makes a serious difference in practical use.

The lock is very secure-feeling and there’s a safety switch on the top of the handle to avoid accidental deployment.

The clip is pretty subtle compared to a lot of clips for similar-sized knives, but this one (though nicely coated with Titanium Nitride) has one big operational issue.  The two screws that hold the clip in place are the two screws whose heads stick up just high enough to prevent the clip from sliding fully onto the top of your pocket.  You can see a demo of the problem in our video below.

Overall, we give this knife our endorsement for one BIG reason; VALUE.  What we mean is that we don’t know too many knives priced well under $100 that give you a 3-inch plus blade made of D2 steel.  Kudos to SOG for pulling this off and positioning themselves as the “best deal” in a higher-end knife on the market.

The pocket clip could use a bit of tweaking though!  In an attempt to make this knife fit deeper into your pocket with a clip that does not have screws ABOVE it, SOG has actually come no further ahead given that the clip can’t slide all the way down onto the top edge of your pocket …. so it still sticks up as high as if the clip was not a deep carry clip.

Still, the clip thing is not a deal-breaker.  The deployment was a little bit tough for me (compared to n0n-assisted models and some other assisted opening models), but that also is not a deal-breaker.  A D2 blade for $85 is an amazing deal and if you’ve taken the time to read through this review, I’d suggest grabbing it while you can at BladeHQ while the price is still this low.

Peter Stec
Hey Knife Up gang! I'm Pete, and I'm just another man like you in a small rural town who loves the outdoors as much as the other million internet users that cruise sites like KnifeUp.com every day. The difference is that I like to share what I know and research what I don't totally know so that YOU can have all the info you need to feel confident and prepared for all things outdoors-related! And, for those who care, I have 42 years of wilderness canoeing and bushcraft experience in Northern Ontario and spend most of my Summers covered in mosquitos and fish slime, but hey, it's a lifestyle choice, eh?
Recent Posts
15 Best Pocket Knives Under 30 in 2021
10 Best Knife Sets Under 100 in 2021
10 Best Pocket Knife For Kids in 2021