Table of Contents
Kukri vs Machete
Kukri
Machete
Which one is right for you: Kukri or Machete?
Conclusion

Kukri vs Machete: How These 2 Are Different From Each other 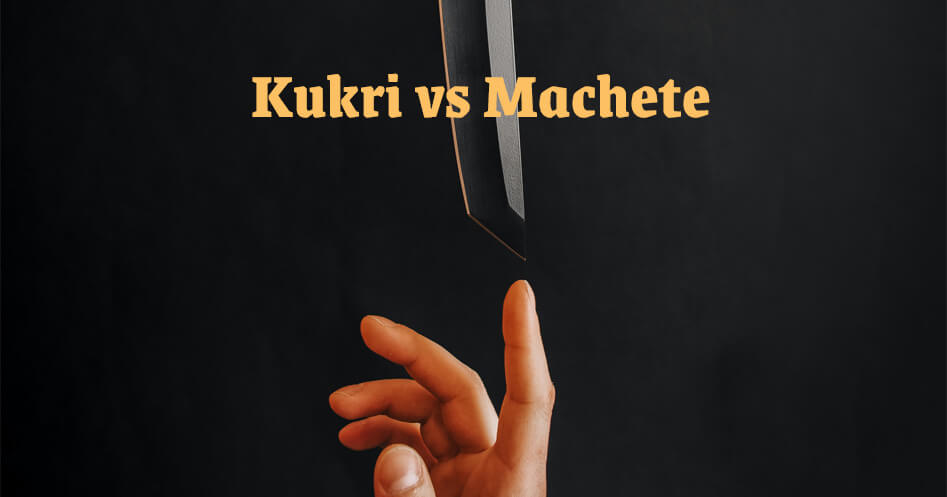 Hey there. Are you having slight trouble figuring out and understanding exactly what a kukri and machete are used for? Do you have particular tasks to fulfill with certain tools but aren’t too sure about which one is a better fit? Don’t worry, we all get a little lost and it never hurts to learn more.

In this article, we will be going through the fundamental differences between a Kukri knife and a Machete in terms of use, material, advantages, disadvantages, design, edge, and blade style.

We will also understand how culturally some places use knives such as the Bolo knife which is particularly used in jungles of Malaysia, Indonesia, and Brunei while other places such as Nepal use the Kukri for daily use while opening cans, skinning animals, and cooking.

But it is essential to remember that they are both survival knives and look quite similar when you look at them, but both of them offer different pros for different purposes. Knowing the right thing will make all the difference while choosing the right knife.

Difference between the kukri and a machete

Let’s establish a basic difference between the kukri and a machete. A kukri is a machete, but simply a variation of it. There are various types of a machete such as bolo, parang, barong, bowie, panga, cane, and Latin machetes. We tend to imagine the classic Latin machete whenever we think of the word ‘machete’.

The kukri styles a much steeper curve followed by a rounded-off dip at the middle of the blade, and ending with a heart-shaped pointed edge. This simple differentiation dictates how you swing or use the blade.

The classic Latin machete is distinguished by a blade that gradually gets bigger as you move towards the tip of the edge. The blade features a tiny swooped in belly right beneath the tip of the blade.

Handle and ease of use

Typically, the kukri is a bit heavier than the machete. The kukri also has a curved blade which makes it a little hard to pack and unpack wherever you go. Honing and sharpening the curved edge is not the easiest task either.

Whereas the machete is much lighter which makes it easier to pack and unpack wherever you go. Honing and sharpening the blade of a machete is an easy task.

There is no standard weight of either of the knives as each manufacturer might add or remove features that could directly affect the weight, but typically, the kukri knife tends to be heavier due to the use of thicker steels. This affects one’s ability to balance the knife with ease due to the curved style.

Machetes tend to be lighter than the kukri since the simple design of the machete does not affect the balance and ease of use.

Kukri are meant to be utilized as tools rather than regular cutlery due to the curved shape of the blade. A kukri is a great tool if you utilize it for farming, gardening, hunting, and harvesting crops. Crops such as melon vines and corn stalks can be managed and cut down with very little effort.

Kukri is the ideal knife for anyone who wishes that their tool is a multifunctional one.

The machete is ideal for anyone who doesn’t require any special features or extravagant shapes and appreciates the simple design of the classic machete. It is brilliant for almost all campsite tasks and could help out with a bit of landscaping as well.

The machete has one-trick and it performs that trick with great precision. In case you are looking for simple and easy to use for simple tasks such as hacking branches or bushes, then the machete is perfect for you.

Which one is right for you: Kukri or Machete?

Kukri is the ideal knife for anyone who wants a multifunctional and versatile tool that can perform comprehensive tasks such as cleaning, chopping, hunting, and dressing along with many more campsite tasks.

In case you’re new to using knives or you’re looking for something rather simple and uncomplicated that can chop, cut, and carve things with ease, then the machete is the one for you.

Either way, a knife is only as ideal as it is useful. Hence, you should pick something that you would use regularly in case you do not have the use for both in your life. If you find yourself needing a kukri as well as a machete depending on the variety of tasks you have to perform and the lifestyle you lead, then invest in durable machete and kukri knives.

So, there you have it! Now you understand and know that a kukri is essentially a machete and belongs to the same family. The sole difference lies in their usage, weight, shape, and applications. A kukri can perform multiple tasks and can be used while gardening, harvesting, hunting, cleaning, and dressing animals amongst other things.

The classic Latin machete is perfect for simpler tasks that require precision to a certain degree and for tasks such as hacking down bushes and branches, cutting down sturdy crops, carving Tinder, chopping vegetables or meat.

You can take a look at your daily life tasks and if you are someone who ventures out in the open quite often and encounters varying situations while procuring food, setting up camp, and much then the Kukri stands out to you. But, if you are someone who focuses on one or two simpler tasks daily, then the machete is ideal for you.