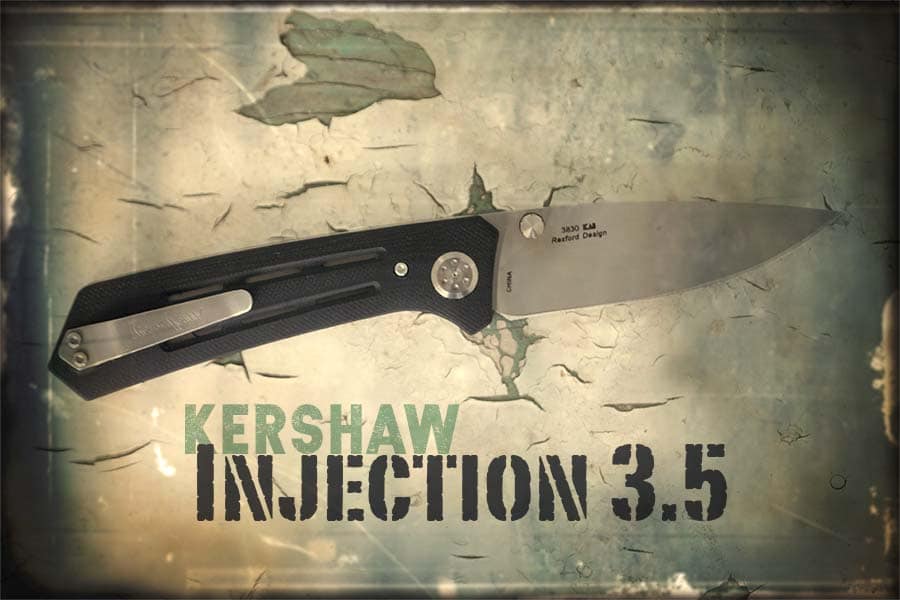 The Kershaw Injection is a Todd Rexford design and it was first released to the retail market in 2013.  Because of nothing more than standard operating protocol in the industry, it was discontinued in 2016, though you can still find it online (I did!).  Kershaw is a brand of the parent company Kai USA and it’s based out of Oregon.  Kai is a Japanese knife company with a US-based factory and brands.  It also maintains facilities elsewhere in the world.

Kershaw likes to say of the Injection 3.5 – “it’s a knife with custom details without the custom price”.  That may be true, but our very first thought upon seeing it unboxed was “that’s simple!”  Its design and profile are very understated, but when you actually look at it a bit closer, you’ll start to see some unique design elements which are often more typical of a custom design for sure!

Specifications of the Kershaw Injection 3.5

As with most EDC knives, out of the box the blade was really sharp.  It did have a few notable qualities I saw immediately, like a matte (bead-blasted) finish which has a more refined, custom and high-end look to it compared to a shiny, stainless steel finish.  It was also quite notable (to me anyway) that there was zero side to side play in the blade, and it felt more secure than many pricier models we’ve reviewed.  The one disappointment we experienced with the blade was its lack of a finger or sharpening choil.  Your index finger sits pretty close to the blade itself and you have to be careful not to cut your finger when closing the blade.

There is no gimping at all anywhere on the blade, and notably, gimping is absent on the handle as well.  This is what accounts (in part) to its very simple, sleek look.

The G10 handle is sleek and well formed to fit your hand with no sharp edges.  It ranks in the top 5 most comfortable knives we’ve held!  The handle also adds a few custom features like decorative slits cut into the sides that allow you to see right through to the steel liner.  That detail helps it look a little less plain, but it can also burden you with dirt and other foreign debris that may be hard to remove once it’s packed in there.  The criss-cross texture on the handle is VERY subtle, but we like the look.

Like many comparable knives, the clip is reversible for left or right carry, but it can only be used for tip-up carry.  The design is decent, though not spectacular

I mentioned earlier something about a custom design or features on the Injection, without the custom price.  Here’s a bit more on that:

The thumb studs have a very machined look and also includes gimping on THEM!  We don’t see that often.  I didn’t feel the gimping was much good on the studs and did not significantly affect the actual operation of the blade, but it’s a nice detail.  Also, the blade pivot pin is finished with a large metal disk and 7 small divots that add to a very tough and aggressive look.  The lanyard hole is one of the most unique we’ve seen.  It’s a recessed or inset style lanyard holder and it’s actually not a “hole” at all.  It’s a pin at the back of the handle that spans the two metal liners, and has just enough space to pass a pretty substantial lanyard string under it and out the other side.  This style of lanyard hole does not allow for the lanyard itself to protrude out the sides of the handle.  This design makes the handle sleeker and far less “evident” while sitting in your pocket or hanging at your side.

Finally, another notable custom feature is the chamfered (cut on angle) backspacer at the back of the handle.  While it still looks cool, I might have made it a different color to add visual interest (as other designers have done on other models).

Before I tell you my overall impression, it may be good to note that the reason this knife is called the Kershaw Injection 3.5 is that its blade is 3.5 inches long.  There is also a 3.0 inch model in existence!

Probably one of the biggest issues we noticed about this knife is its weight.  It’s twice the weight of some other EDCs.  Some knife owners really like lightweight knives for ease of carry.  We understand since a heavier knife is extremely awkward to carry in a jogging pant pocket which has no structure.  If that’s you, this knife won’t work well for your purposes.  It’s quite substantial and it has monstrous liners for its size.  Also, it’s noteworthy to mention that the balance on this knife is near perfect.  We own several more expensive and better-known knives which are obviously blade-heavy.  If you appreciate the finer quality of a well-balanced knife, the Injection would make you smile!

We like this knife as a great camp knife more than an EDC.

We dare say you could use this knife as a hunting tool quite easily though it’s really an EDC.  Would I carry it?  The answer is yes, I WOULD carry it if I didn’t have better EDC alternatives.  You see, I’m one of those knife-lovers that appreciate lightness (but without sacrificing function and durability).  This is an excellent knife (for the price – given that it’s made in China) and it’s well-balanced.  However, it’s a tad bit heavy for me.  I like to carry things in my pocket that are as unobtrusive as possible, and the Injection is a heavier knife that functions no better than my EDC, the Spyderco Paramilitary.