Table of Contents
Dagger
Dirk
Dagger vs Dirk | Is it illegal to carry a dagger or a dirk?
Conclusion

Dagger vs Dirk: What’s the Difference? 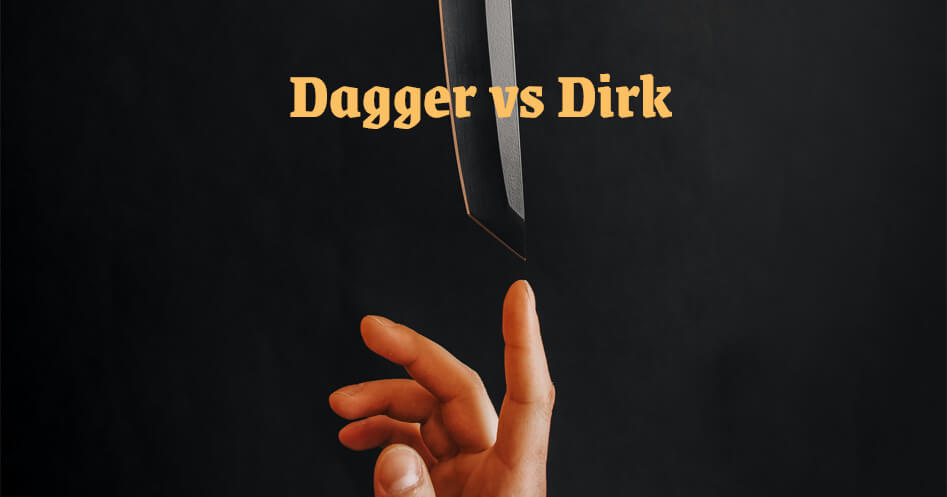 In this article, we will learn and understand the difference between a dirk and a dagger along with each one’s purpose, advantages, disadvantages, and maybe some fun history facts about dagger vs dirk!

It doesn’t matter if you are a raging knife enthusiast or someone just learning the ropes of the knife world; this relatively excellent article is meant to help clear all your doubts and help you make the right decision.

Let’s begin by understanding the use, history, pros, and cons of a Dagger.

A dagger is a double-edged short blade and is designed in a way that it would inflict great pain and damage on whoever it lands or pierces in simple stabbing thrusts. I think we all remember Julius Caesar from our school literature books and history? His death is one of the notable deaths caused by a dagger in history.

A dagger typically is built with a hilt that the owner can hold onto or grasp to ensure that they do not inflict any injuries on themselves while handling the blade. The hilt requires an additional sheath for proper storage. Their distinguished shape sets them apart as well as makes them highly iconic and easily noticeable mostly because they are one of the few blades that are short with a narrower point and a spine that splits into two sharp cutting edges.

History of a dagger

The dagger finds its origin in the prehistoric era where it functioned as a tool as well as a piece of hunting equipment. Initial daggers were created out of ivory, flint, or bone. Eventually, copper daggers appeared on the scene during the Bronze Age, nearly five centuries ago in Egypt.

Daggers had a social connotation as well and many members of the Egyptian Royalty would carry gold daggers as a simple show of class and status. Over time, the dagger, like any other prominent item, became a symbol of wealth and was often adorned with precious gems.

Once guns became the choice of weapon over blades due to their fatality and ease of use, daggers became more of a ceremonial thing. However, this does not render it a useless weapon, andand many militaries, as well as individual soldiers, consider the dagger as one of their favorite weapons.

During WW I, daggers were vastly used during close combat fights in trench warfare.

If the dagger is not as heavy as it should be, there will not be enough force behind the dagger to help with its smooth penetration. The additional weight also facilitates the dagger’s durability. Most daggers weigh in over a pound.

Dirks are a type of knife that are utilized as weapons. They are set apart by thin and pointed shapes and serve a purpose similar to the dagger’s – to thrust into enemies. The thin and slim design facilitates the smooth movement of thrusting, allowing the knife to penetrate with ease.

Dirk knives have been around and survived the brute of various centuries. The first recorded dirk knife finds its origin in the 17th century, where it was used mainly by Scottish Highlanders and people involved in the navies. Since their origination, dirk knives have changed and evolved with time.

History of a dirk

In the ruling and prominent era of sails, the midshipmen and captains required a decent knife to help them ward off any trouble that came their way as well as help take over enemy ships. They were looking for something that was not as long as a sword but not as short as any other hand knife either.

Hence, the dirk seemed to be like the perfect weapon. With the help of the dirks, shipmen could board enemy ships with ease and engage in hand combat which would eventually lead to victory.

The dirk became a very crucial weapon in the world of navies across the globe. But, with the onset of more sophisticated weaponry and guns, the dirk was soon outshone.

Due to the crucial role it played in the history of the battle, the dirk is still highly respected by navies. Now, it has a more ceremonial aspect attached to it. In quite a few countries, Navy officers are presented with a dirk at the time of their joining.

While the navies were fighting with dirks on one side of the world, the Scottish Highlanders were getting familiar with this blade on the other side of the world. The dirk was a brilliant alternative to swords; swords were typically too long and expensive; hence affordability was an issue amongst Scots.

The dirk seemed to be the perfect solution for all their woes. They used the dirk beyond its role as a weapon and incorporated it into their daily routines. The Scots created a bond with a dirk similar to the one samurais have with their katanas.

Thus, dirks are recognized as an eminent symbol within the Scottish culture.

Dagger vs Dirk | Is it illegal to carry a dagger or a dirk?

Within the USA, citizens have the right to bear arms which means that one can own a dirk or dagger for self-defense or as a collectible. The real issue arises in the public sphere of life.

The laws surrounding carrying a dirk or dagger can become confusing as each state has its regulations and limitations on knives. And, some states do not mention dirks in these regulations.

Just to be on be safer side, it is best advised not to carry your dagger or knife around as they are essentially considered weapons. One does not use their dirk or dagger for anything else since their utility is relatively excellent low.

If a layman had to take a look at a dagger and then a dirk, they would be able to name none to very few variations. We hope that with the help of this article, you can distinguish between the two with ease and understand the significance each played during their era of popularity.

They are both essentially combat weapons and differ in small yet significant ways.

Peter Stec
Hey Knife Up gang! I'm Pete, and I'm just another man like you in a small rural town who loves the outdoors as much as the other million internet users that cruise sites like KnifeUp.com every day. The difference is that I like to share what I know and research what I don't totally know so that YOU can have all the info you need to feel confident and prepared for all things outdoors-related! And, for those who care, I have 42 years of wilderness canoeing and bushcraft experience in Northern Ontario and spend most of my Summers covered in mosquitos and fish slime, but hey, it's a lifestyle choice, eh?
Recent Posts
15 Best Pocket Knives Under 30 in 2021
10 Best Knife Sets Under 100 in 2021
10 Best Pocket Knife For Kids in 2021