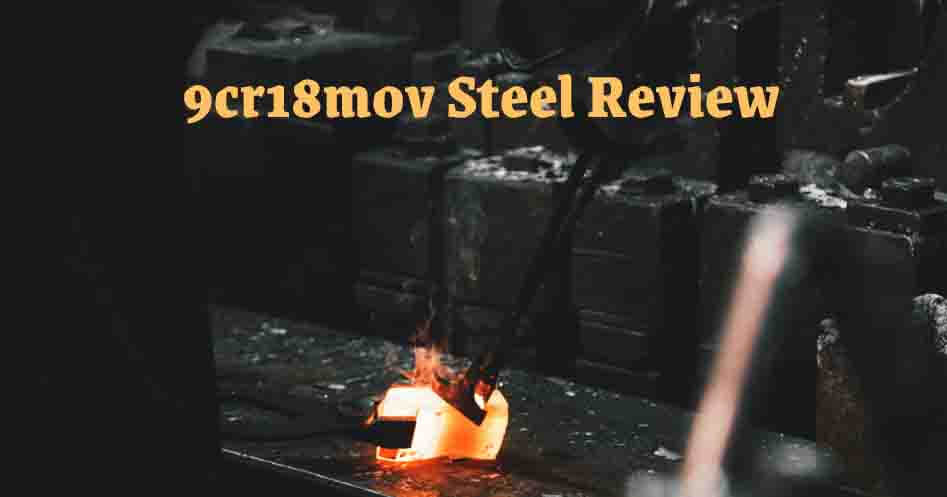 9cr18mov is another steel from the ‘Cr’ or ‘MoV’ range that is steadily gaining popularity. You’ll have noticed a lot of great mid-range quality knives being made from this steel. If you’re curious to know more about 9cr18mov, Read the complete guide on 9cr18mov steel review.

In this article, we’ll dissect everything there is to know about 9cr18mov. We’ll look at its chemical composition, properties, how it compares to other steels in the same range, and even the best stainless steel knives in the market made out of 9cr18mov.

9cr18mov is a Chinese mid-range stainless steel that’s known for its exceptional corrosion resistance. Like other steels in the same range, 9cr18mov is martensitic and undergoes tempering in order to obtain its high crystalline structure.

9cr18mov is also called 90cr18mov. Both names refer to the same stainless steel.

Even though 9cr18mov has great hardness and decent toughness, it’s shining (metaphorically and literally!) feature is the corrosion resistance due to the high amounts of Chromium. For this reason, 9cr18mov is often used in applications where corrosion is a big no-no: such as medical equipment and food-grade equipment.

Apart from having great corrosion resistance, 9cr18mov is also known for holding a good edge. The edge resistance of 9cr18mov is definitely worth the mention, and this is one of the major reasons why it makes such a good knife. In fact, 9cr18mov isn’t just used for knives — it is also used for cutters, scissors, injectors, and surgical tools.

What is the Composition of 9cr18mov?

9cr18Mov is high-alloy steel — meaning that it has the perfect combination of a lot of elements. Each of these elements plays a role in the final product’s properties. Understanding the role that each element plays can be vital in making your decision between two steels, in order to understand which would be the better choice in a knife.

Let’s look at the chemical composition of 9cr18mov:

9cr18MoV is high in Carbon, Chromium, Molybdenum, and Vanadium: all of which take credit for 9cr18mov’s great hardness, strength, corrosion resistance, and edge retention.

As far as stainless steels go, 9cr18mov has pretty impressive hardness due to the high amounts of Carbon in it. 9cr18mov scores a 62 on the Rockwell Hardness Scale, but can vary anywhere between 58 to 62 HRC depending on the manufacturers.

What is the Heat Treatment of 9cr18mov?

9cr18mov is martensitic steel, and undergoes three phases of heat treatment in order for it to reach optimum hardness, edge resistance, and wear resistance.

The second heat process that 9cr18mov undergoes is tempering. Tempering also involves heating and cooling but is generally done in an air vacuum. The tempering range of temperature for 9cr18mov is 100 – 200 ℃ and happens in the air.

Finally, quenching is done. Quenching also involves heating the steel but cooling it down in a liquid such as oil or saline water, or even regular water. 9cr18mov is generally cooled down in an oil quench. This is done for the internal strength to be improved. The temperature range for oil quenching for 9cr18mov is 1050 – 1075 ℃.

We now come to arguably the most important part: the properties of the 9cr18mov steel. 9cr18mov is high-alloy steel, and the multiple elements make a big difference in its final capabilities.

You should always pay attention to the properties of a steel if you’re planning to buy a knife that’s made from it. That’s because certain properties might be more important to you than others, and you might be willing to compromise on some weaknesses of the steel while others are a dealbreaker.

Let’s look at what the 9cr18mov can offer in terms of its properties, and how this affects a knife that’s built from it.

9cr18mov has pretty good hardness because of the high amounts of carbon in it, as well as the addition of alloy elements like Molybdenum and Vanadium. It also scores between 58-62 on the HRC scale, which is good for mid-range stainless steel.

The toughness of 9cr18mov isn’t that impressive, but it isn’t bad either. Since you get great hardness with the 9cr18mov due to the high carbon content, it’s only expected that the toughness of the steel might take a hit.

However, it’s still acceptable considering all the other great properties of the 9cr18mov. The toughness is good enough for mild to moderate applications.

How often you have to sharpen the knife strongly depends on the surfaces that the knife often comes in contact with. While the 9cr18mov does have good edge retention, you should carry sharpening tools with you if you plan to take it on an outdoor camping trip.

Due to its high level of hardness and brittle nature, the 9cr18mov isn’t very easy to sharpen. A knife made out of 9cr18mov will take a while to sharpen, should you undertake the task.

However, the good news is that you may not have to do it very often thanks to the great edge retention capabilities that the 9cr18mov has. Even though sharpening will be a chore, its one that you can conveniently forget about for long intervals.

You would still have to take care of the knife to ensure that it’s not spending too long soaking in water or being stored in a damp location.

A knife made out of 9cr18mov will not rust easily if given minimal care!

Is 9cr18mov Good for Knives?

After looking at the chemical composition and steel properties, it’s easy to conclude that 9cr18mov is a great stainless steel for knives. With good hardness, edge retention, and corrosion resistance, this is the perfect mid-range knife to invest in. It will definitely hold up for a long time, good as new.

No, it’s difficult for 9cr18mov to form rust, thanks to the high chromium content that’s found in it. Knives made out of 9cr18mov won’t rust easily, and also have great wear resistance.

However, it’s recommended that you take care of your knives by keeping them clean, dry and even oil them once in a while.

Yes, due to the high levels of chromium in 9cr18mov, it is stainless steel. Not only does this mean that it won’t form any rust, but it will also be safe from tarnishing. You can be rest assured that your 9cr18mov knife will remain in a good ‘like new’ condition for a long time.

How does 9cr18mov Compare to Other Steels in the Market?

9cr18mov is great high-alloy steel in the mid-range with great properties such as corrosion resistance, edge retention, and hardness. However, in order to determine if it’s the best steel for the kind of knife you have in mind: you have to take a look at the other steel options.

We’ve rounded up the three most similar steels to 9cr18mov in terms of price and properties in order for you to make an informed decision about which performs the best.

Even though 8cr13mov and 9cr18mov are in the same MoV Chinese steels range, they have very different properties. 9cr18mov far outperforms 8cr13mov in terms of edge retention.

9cr18mov has much of the advantage over AUS8 in terms of edge retention, as well as hardness and corrosion resistance. AUS8 has an edge over 9cr18mov in toughness and ease of sharpening.

The 9cr18mov and 440c are the closest in terms of properties. However, many knife experts are of the opinion that 440C feels higher quality and makes more durable knives. Keep in mind that 9cr18mov is more affordable than 440c.

If you think 9cr18mov sounds perfect for your next knife, but cannot locate it anywhere: you can opt for the closest equivalent. The 440c is the next best thing in terms of what the 9cr18mov offers. They’re both great stainless steel knives with high hardness, toughness and corrosion resistance. Many people are of the opinion that both 440b and 440c are of better quality than the 9cr18mov, but this may also be an assumption since they are costlier steels!

Now that you’re convinced that 9cr18mov is the perfect material for knives, it’s time to look at some knife options. While it’s important to focus on the material of the knife you’re purchasing, especially the properties and composition — it’s also imperative to pay attention to the features of the knife itself.

You should look at the blade geometry, which is the cut and design of the knife. Some knives can have the exact same steel composition but will last longer and perform better due to the clever design.

We’ve rounded up the best 9cr18mov steel knives in the market for you to take a look at. These knives have been known to perform well over time and do justice to the great stainless steel that 9cr18mov is! 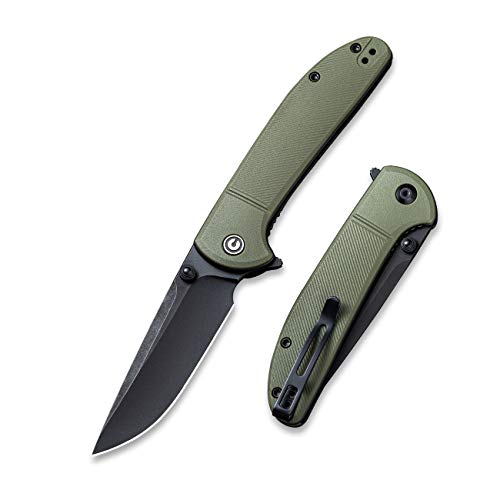 This flipper pocket knife is a thing to behold. The 3.25” flat blade with a plain sharp edge is made out of pure 9cr18mov steel, and the handle is easy to grip, made out of fiberglass reinforced nylon. It’s easy to flip this pocket knife open and close, but we particularly like the locking system that ensures the knife owner’s safety during use.

If you’re doubtful of the performance of this flipper pocket knife, it has a lifetime warranty that you can rely on! 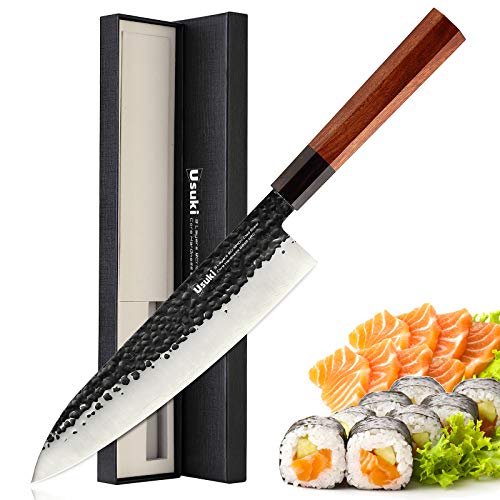 9cr18mov makes a great kitchen knife: it has the perfect hardness and edge retention to tackle any ingredient, whether that’s slicing onions or carefully filleting fresh fish.

This Gyuto Chef’s Knife does complete justice to the incredible steel that 9cr18mov is, with an 8.5-inch blade and an octagon textured handle for great grip.

Chopping and slicing become that much easier (and safer) with a great knife like the Gyuto Chef’s Knife! Japanese knives are known for their great quality and precision, and this one is no exception.

If you were unsure about getting a knife made out of 9cr18mov, don’t be! This great stainless steel knife is perfect for a knife that will last you a long time, thanks to its superior corrosion resistance, hardness that doesn’t compromise on toughness, and most importantly edge retention.

9cr18mov provides premium performance at mid-range price points, which is a great bargain. Let us know your thoughts on the 9cr18mov steel.

Jeffrey
Recent Posts
How to Sharpen a Knife the Right Way (Supreme Guide)
How to Close a Pocket Knife? Step-by-Step Guide (2022)
Different Types of Pocket Knives [How to Choose The Best One]