The Yosemite Decimal System was created by the Sierra Club in the 1950’s to classify all types of mountaineering adventures. They created a three-fold categorization system that I have summed up as difficulty, duration, and deadliness. As going outdoors got more popular, especially technical climbing, the Club that John Muir founded before the turn of the 20th century, realized that classifications were needed as they lead more people into the outdoors.

So they broke all mountaineering activities into 6 different classes, with protection ratings coming along the way. At that time, technical climbs were only classified up to 5.9. As rock climbing equipment got better and climbers got braver, they realized that they needed more space in the categories. This gave birth to the 5.10 and the lettering system (a-d) as they tried to build in room for growth within their categories.

Today, the YDS is still alive, well, and thriving — with the hardest climb in the world being classified as a 5.15d and is in Norway.

Right now you’re probably asking: “So what do all of these classifications mean and what do they mean for me?” Well here goes:

Two notes before we start:

**There are multiple different types of classifications systems, the YDS is the most popular in America for trad and sport climbing. The French system is gaining more popularity and the Hueco is another beast of its own, where bouldering is concerned. This article is specifically about YDS classifications.

**This system was created specifically for outdoor climbing. When indoor climbing became possible and popular, YDA moved indoors, but the numbers get really fudged when transported like that. So if you are primarily an indoor climber, you’re going to want to take away anywhere from .2 to .4, depending on how soft your gym rating is, to the end of these climbs. So if you regularly climb 5.11a, you’re most likely able to climb a 5.6-5.8 outdoors.

This is like walking on a sidewalk or very easy, no-incline hiking.

Simple Scrambling where you might have to use your hands, but it’s not necessary. If you cross-country hike then these are typically Class 2s.

The differences between Class 3 and Class 4 are kinda vague, but the general gist of Class 3 is that it is scrambling with increased exposure where you will need to use your hands, and where falling would definitely leave a dent. The Colorado Mountaineering Club classifies a Class 3 as something that can be descended, comfortably, facing outwards. Here ropes would provide safety and comfort but are not necessary.

**Exposure is a term used to literally describe how ‘exposed’ the climber is to having an injury-causing, or fatal, fall. I see and hear it used in numerous ways, but by and large, it is talking about just how likely a climber is to fall to their death or how exposed the climber is to the elements around them. If you are still confused, everyone else is too, so here is a forum dedicated to defining exposure.

Now we have made the jump into more “technical-esque” climbing. Class 4 climbs would be climbs that are simple, have exposure, and where you would often need to use a rope. Climbing on steep terrain is also considered Class 4 climbing. Again the Colorado Mountaineering Club helps out; they classify a Class 4 as something that people feel most comfortable facing the rocks while descending. A rope belayed is usually needed for this class of climbing and a fall would mean multiple broken bones.

Here we enter into the aspect of the YDS that most climbers are familiar with. This is technical rope climbing with a belayer. Falls without the proper equipment and safety would mean death, or you wishing for death. (We will explore this Class later on.)

I know, it’s kinda shocking that there’s another class past 5, and you thought that 5.15d was impossible…Well, this class is an oddity and used primarily for ice climbing. If it is a Class 6 than you must use aids to climb up and cannot complete the climb by natural, human needs. 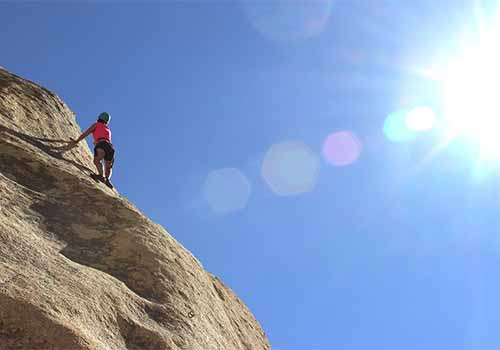 It’s crucial that you are aware of the Yosemite Decimal System and that you know the YDS rating of the climb you’ll be doing!

I appreciate his humor, and I think he gives a good visual for the difficulty and exposure of the class and climbs.  Another rule of thumb would be to stay off of Class 3 or higher unless you are experienced and actually know exactly what you are doing, and you know you are physically prepared for the challenge.

The following grades are used to define how long a climb might take someone. For climbs, these gradings can be really subjective and vary greatly, because a lot of these climbs were classified before the turn of the 21st century. So climbs like El Cap, which once took days, have now been completed in less than a day.

I: One to two hours of climbing

II: Less than half a day of climbing.

IV: Full day climb, “with the hardest pitch being at least 5.7 in difficulty”

V: A climb lasting 2-3 days, “with the hardest pitch being at least 5.8 in difficulty and very long multi-pitch climbs often requiring aid climbing.”

VI: A climb lasting 4-6 days. “Most of the famous routes on El Cap in Yosemite are Grade VI as well as climbs such as the Hallucinogen Wall in Black Canyon National Park and the North Face of Mt. Hooker in the Wind River Range.”

VII: A climb lasting a week or longer.

**I would not have been able to fully explain this section so succinctly if it wasn’t for this Wikipedia page and Colorado Mountaineering.

Again, this section’s ratings are a bit outdated, and some of these are not actually used a whole lot anymore. For example, G and PG are rarely included in most guidebooks. But here they are regardless.

G: Good solid cover and very safe to either scramble or climb.

PG-13: Some protection, falls may be long but most likely won’t result in injury.

R: Runout with little protection. In certain places on this climb, if a lead were to fall, even with protection and good equipment, he or she could be seriously injured or even die.

X: Absolutely zero protection. These climbs are extremely dangerous and if a lead were to fall, almost anywhere, it would most likely result in death.

An Excursion into Class 5

Class 5 is broken up into 15 subcategories, and 5 of those are then all divided into 4 other sub-subcategories. Each of these moves between a 5.8 and  5.9, and a 5.11a to 5.11b, are supposed to be equidistant in their difficulty, so moving between all the levels and sub-subcategories is supposed to be equally, and thus exponentially difficult. Each step up being more difficult than the last, but the same amount of difficulty between each level. I know this sounds weird, but that was the desire of the creators of the Yosemite Decimal System and what classifiers are trying to recreate as they grade new or existing climbs.

I found this quote to be especially helpful, and funny when trying to discern the differences between Class 5 classifications:

“In Mountaineering, Freedom of the Hills, author Ed Peters explains the subdivisions of class 5:

“The experienced climber, having accomplished or attempted free climbs of varying degrees of difficulty in the YDS class 5 range, gains an understanding of the level of difficulty involved. To the beginner, however, these ratings are simply a set of numbers, understandably, easy if rated 5.0 and impossible if rated 5.13. To provide a slightly better understanding within the class for the beginner the following tongue-in-cheek description is provided:

5.0 to 5.4  ||  There are two hand- and two footholds for every move; the holds become progressively smaller as the number increases.

5.5 to 5.6  ||  The two hand- and two footholds are there, obvious to the experienced, but not necessarily so to the beginner.

5.8  ||  The move is missing two holds of the four, or missing only one but is very strenuous.

5.9  ||  The move has only one reasonable hold which may be for either a foot or a hand.

5.11  ||  After thorough inspection you conclude this move is obviously impossible; however, occasionally someone actually accomplishes it. Since there is nothing for a handhold, grab it with both hands.

5.12  ||  The surface is as smooth as glass and vertical. No one has really ever made this move, although a few claim they have.

Again I would like to reiterate that while people try to be as accurate as possible, we as climbers must leave room for variance between the classes and smudging of the ‘lines.’