Table of Contents
What knives are considered illegal to possess and under what circumstances?
Controversies regarding the interpretation of the law
How are knives or daggers defined under the said law?
Conclusion 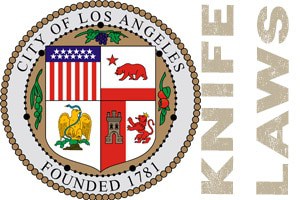 In the US, there are several laws in force on different levels. There are federal, state, and municipal laws, all of which are very confusing when put together especially since they can differ from each other depending on which place you’re in. This causes trouble most of the time, especially for travelers who don’t know much about the distinctions. The knife laws are no exception – just equally baffling and unclear for the most part.

Los Angeles, California is just one of the cities that have very specific, yet vague knife laws. In fact, most of the questions posted were centered on the interpretation of the law and that most of the time you need an attorney to clarify on the finer points.

What knives are considered illegal to possess and under what circumstances?

Under the Los Angeles City Code, Sec. 13.62., it is unlawful for any person to carry knives or daggers in plain view in a public setting, just like other laws i.e. New York City Administrative Code which specifically prohibits the carrying of a knife in a public place in view of the threat caused by its exposure.

This is contained under Los Angeles City Code, Sec. 13.62.020 which states that:

It is unlawful for any person to carry on his person, in plain view, any knife or dagger.

Controversies regarding the interpretation of the law

One of the most common controversies surrounding the law is the interpretation of the provision just mentioned (subsection (b) of Los Angeles City Code, Sec. 13.62.020.), particularly the word “plain view”.

Does plain view mean that you can carry it concealed?

Does plain view only include the knife itself and not a knife in a sheath?

These are just some of the legitimate questions to which we can only interpret in our best comprehension. But going by the letter and the intent of the law, it seems like the purpose of the law is to protect the public from the threat knives pose in plain view. Hence, a concealed knife is allowed on the premise that it cannot cause any known threat or immediate panic among the public, which is mostly oblivious to its existence. A knife that is in the passenger area of a car can be considered in plain view in some cases.

How are knives or daggers defined under the said law?

The term “knife” or “dagger” can be better understood by its definition under Los Angeles City Code, Sec. 13.62.010, which states that:

As used in this chapter, the terms “knives and daggers” shall include any knife having a blade of three inches or more in length; any spring-blade, switch-blade or snap-blade knife; any knife any blade of which is automatically released by a spring mechanism or other mechanical device; any ice pick or similar sharp stabbing tool; any straight-edge razor or any razor blade fitted to a handle.

This definition has a wide implication especially considering its catch-all provision “or similar sharp tool, any straight edge razor or any razor blade fitted to a handle”. This catch-all provision widens the scope of the term knife or dagger, to include any sharp tool with a razor fitted to a handle, even if it does not technically qualify as a knife.

Any person violating this chapter is guilty of a misdemeanor punishable by a fine of not exceeding $500.00 or by imprisonment in the County Jail for a period not exceeding six months, or by both such fine and imprisonment.

The foregoing restrictions shall not be deemed to prohibit the carrying of ordinary tools or equipment for use in a lawful occupation or for the purpose of lawful recreation, or where the carrying of a knife or dagger is a recognized religious practice.

Knives reaching 3 inches or more are banned to be shown in public, regardless of whether you intend to use it for something legitimate or not. What is given more priority by this law is the effect of the possession of the knife which is panic and undue threat to the public, rather than the intent of its holder for its use.

The intent of the lawmakers to curb the effects of shown bladed weapons can also be gleaned from the fact that concealed weapons are allowed. When the knife you’re carrying does not in any way affect the public, it is allowed to be carried. This is not the case with regard to other states, so we can say that this law is far more laid-back than other laws.

Note that this is not legal advice and state/federal knife laws also come into play. Read the KnifeUp guide to California state knife laws here. Check out the top 3 tactical tomahawks.

Peter Stec
Hey Knife Up gang! I'm Pete, and I'm just another man like you in a small rural town who loves the outdoors as much as the other million internet users that cruise sites like KnifeUp.com every day. The difference is that I like to share what I know and research what I don't totally know so that YOU can have all the info you need to feel confident and prepared for all things outdoors-related! And, for those who care, I have 42 years of wilderness canoeing and bushcraft experience in Northern Ontario and spend most of my Summers covered in mosquitos and fish slime, but hey, it's a lifestyle choice, eh?
Recent Posts
M2 Stainless Steel Review: How Good It Is for Knives?
Best Ulu Knives 2021- Buying Guide
Chicago Cutlery Reviews 2021