How to Make a Homemade Natural Fly Trap

Flies are a nuisance. They multiply fast and hover over the dirtiest places and even areas you do not want them in. While it’s convenient to buy flytraps from the local store, it’s not as cost-efficient and could become just as much of a nuisance, especially with how flies can multiply in one night. In this case, a homemade fly trap might be suitable and just as effective as a way to kill flies.

The simplest option for a homemade fly trap is what we’ll start with.  It’s nothing more than a tumbler (I use a large, old, plastic, clear cup that has seen better days).  This is by far the quickest and simplest design.   You’ll need:

Once you have the supplies, just fill the cup with sugar water/syrup and a few drops of dish detergent, then cover the tumbler with the plastic and then secure it with a rubber band.  Poke appropriate-sized holes in the top (about 6) and you’re done.  Please be sure the liquid is not so thick that a fly can stand on it.  Once the fly lands IN (and not ON) the liquid, the dish soap will cling to the wings of your adversary and help hasten their demise.

There are a few things that need to be mentioned at this point.  Obviously, the type of bait or attractant you use will have implications.  Sugar water or corn syrup will do more to attract adult flies while smelly, rotten things like meat or poo will be the best for larvae (which the adult flies will lay).  You’ll do well to use either of these options when baiting your trap (though I’ve yet to meet someone who ACTUALLY uses feces in their fly traps).  Of course, you’ll want to stick with sweet liquid in your home since the smell of rotting meat is not exciting or positively stimulating!

Also note that other flying creatures (and some non-flying ones too) will be attracted, so you’ll have to adjust accordingly.  If you want mainly fruit flies to be caught, make your holes smaller.  Larger holes will allow house flies in, but they’ll also allow fruit flies out a lot easier.

If your trap is outdoors, you may consider adding a bit of vinegar since this will encourage flies, but discourage wasps if that’s something that works for you.  Otherwise, ditch the vinegar if you want to catch every flying nuisance you can!

Here’s our “Cone ‘N Jar” method.  This consists of a wide-mouthed (Mason) jar with sugar-water and a paper cone.

Wrap your sheet of paper into a cone shape leaving a 1 cm hole in the bottom.  You’ll notice the cone is not completely perfect all around the outside so you’ll need to add another section of paper for maximum efficiency along one edge that is open.  The paper can be taped into shape with Scotch tape.  Be sure the cone itself is not touching the water since that will defeat the entire trap’s ability to function.  Place the cone into the jar top so it looks something like the photo below.  The idea is that because a house fly’s eyes are not the greatest (but their smell is unmatched in its sensitivity), they’ll find their way into the jar through the huge hole, but it’ll be tough to find their way out through a teeny, weensy hole (and away from the wonderful-smelling and attractive liquid).

Fly traps bought at the local store work simply; they are thin sheets of paper lathered with sticky substance. This sticky layer is supposed to emit a kind of smell that is too tempting to pass off. Since flies are blind and find their way by smell, attracting them into a trap is easy. When making a homemade fly trap, all that will be needed is an effective body for the trap and really smelly bait.

People call this particular homemade fly trap as the “poor man’s fly trap” mostly because the materials are commonly found inside or outside of the home. An empty plastic soda bottle is the most common object in any household that you can find. It is also the cheapest and most convenient to use for a homemade fly trap. For one thing, it won’t get soiled under the rain like cardboard milk containers and toilet paper rolls. The two biodegradable objects are not completely useless; in fact, they are perfect for environmentally conscious people.

Now, to make the bait: find a straw or stick that will quickly fit into the opening of the bottle. Naturally, this straw or stick will have to be dipped in anything sticky and sweet. Honey is the best jelly to act as bait. There is no need to lather the stick or straw too generously with honey, dipping it once will suffice.

Another way of making a homemade flytrap using plastic soda bottles is filling it with soapy water at the bottom. This time, it will be placed vertically standing. Instead of using the opening, cut two golf-sized holes near the neck of the bottle. The bottle should be at least 2-liters big so that the holes won’t consume too much space. As bait, simply find smelly treats or food. It can be anything; a piece of tuna, a small dried fruit or honey-lathered straw.

Tie the bait with a piece of string and tape the other end underneath the cap of the bottle before sealing it in. The idea of this homemade fly trap is that if the flies ever break loose from the bait, they will fall into the soapy water, preventing them from flying out the way they came in. Flies will die due to drowning or simply starving in these traps.

For a really poor man’s homemade fly trap, mixing sugar with vinegar will make a really effective bait. There is hardly any need for soapy water or additional bait; the sugar will do the attracting while the vinegar will serve as the trap. For a more eco-friendly repellent instead of trap, fragrant oils work wonders. Sage, rosemary, lavender and peppermint oil can ward off some flies away from certain areas of the house and possibly into a homemade trap.

Okay, if you’re still not convinced, or you’d like to double team the flying parasites, check out this totally NOT homemade or natural killer.  We use both natural and store-bought to control flies in our rural home! 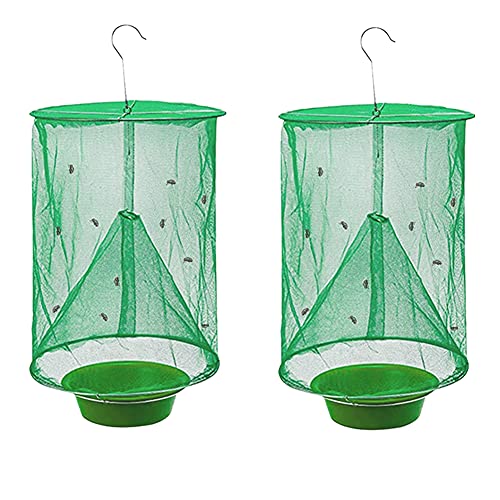 Rachel Ugarte Testimonial from The Ranch Fly Trap on Vimeo.

Learn about the top 3 machetes, folding knife, and hunting knife.

1 thought on “How to Make a Homemade Natural Fly Trap”