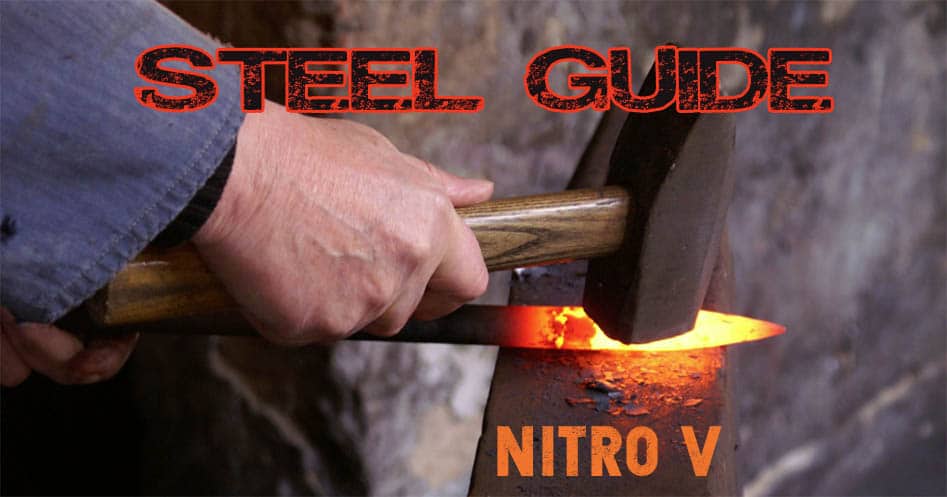 With the vast amount of “boutique steel” on the market today, the knifemaker and consumer have an unprecedented ability to be choosy about the type of steel they want in their knives. Online forums are awash in back and forth banter on what steel to use for what purpose, how to heat treat and temper those steels, and what technique to use for sharpening them. We regularly visit the knife forums here at KnifeUp Magazine to get a feel for what the consumers and bladesmiths are saying about a particular type of steel. One type of stainless steel seems to keep popping up when conversations go toward hardness and corrosion resistance. That type of steel is called Nitro V.

Nitro V is a newer steel and is made by the New Jersey Steel Baron company. According to their website, “The Baron’s Nitro-V is NJSB’s latest effort to provide premium cutlery grade steels and materials in an ever-expanding, evolving craft that is custom tailored to our customers’ wants and needs.” The onus on New Jersey Steel Baron is that these new steels need to address the shortcomings of the steels they intend to replace. So how does a company do this? The answer, in this case, is to take an already existing great steel and improve on it. Nitro V is actually AEB-L at heart. NJSB added Nitrogen and Vanadium to improve edge performance, and to achieve high hardness and extreme corrosion resistance. It has been said on more than one occasion that Nitro V could very well be used in diving knives, rather than the standard 420c or titanium, because of this ability to resist staining and corrosion. Nitro V is a martensitic stainless steel with a chromium-based composition. The breakdown of the elements is as follows:

Nitro V has a hardness of 58 – 62 Rc. Because of this wide range of variance in hardness (depending on how it’s manufactured), it’s not listed on the HRC chart in this review!

This puts it slightly higher than that of AEB-L, though 62 Rc is rarely if ever seen. When speaking about the hardness, Aldo Bruno, the New Jersey Steel Baron who designed this alloy said, “We’ve been following the same heat treat as AEB-L. We’re getting it to 64/65 Rc after a plate quench from 1980 [degrees] and dry ice. We leave it at 1980 for 5 minutes before quench. The first blade we did we left in for 20 minutes at temperature by mistake (too much bull@!$#ting!) and we ended up with 56 Rc before cryo, which kind of freaked us out. We threw it in the ice for about a minute and it shot up to 63+ Rc. We then proceeded to beat the crap out of it for 2 days. I think you guys are going to be pretty happy with what we ended up with.” Though vanadium has been added, wear resistance is not significantly improved over AEB-L due to the low percentage of it being present. The edge stability is comparable to AISI 52100 steel. Nitro V is able to be polished to a mirror shine due to the hardness, which as well allows it to be ground to a very thin edge that is perfect for slicing knives.

This was difficult due to the fact that Nitro V is so new and very few knife manufacturers are using it. RMJ Tactical is one exception, and likewise, their knives are exceptional. Our favorite using Nitro V is the Jungle Combat.

The RJM Tactical Jungle Combat was born out of respect for the knives carried during the Vietnam War. It was designed by Ryan Johnson and differs from its cousin, The Combat Africa which is an homage to a WWII style combat knife. As the story goes, Ryan was making a knife for a S.W.A.T. team member when a friend came by his shop. This friend critiqued the knife, stating that the blade was too thin and may break when used for prying. Ryan replied that this blade was not designed for prying, prompting his friend to say that the conditions dictate the knife, not vise-versa. This changed Ryan’s outlook on tactical knives forever. He would design his knives to be able to withstand any condition presented to the user. His use of Nitro V in his Jungle Combat knife keeps with that tradition. The Jungle Combat features a 6.5-inch Nitro V bowie-type blade with a blood groove. It has a flat-ground plain edge that is 3/16-inch thick with a Tungsten Cerakote finish. There is a finger choil behind the blade for greater precision during delicate work. The handle scales are 3D machined G-10 and available in black, dirty olive, and hyena brown. This is a substantial knife that is 12-inches in overall length and comes in at a whopping 13.4 ounces. If you include the Kydex sheath, the weight climbs to 18.8 ounces. A lanyard hole rounds out the sheath and provides a secure attachment point. The sheath is low-riding, with M.O.C. straps for comfortable belt-carry, and are M.O.L.L.E. compatible. The Jungle Combat feels great in the hand and is well-balanced. There are no obvious hot spots. The overall look of the knife is fantastic, with clean lines and the popular thin handle scales with a textured finish. The Jungle Combat would be a great addition to any knife collection.

It can be assumed that as knife makers utilize Nitro V more and more in their designs, the costs of production will go down and the popularity will climb. This is a great steel that is based on another great steel. The added corrosion resistance and hardening of the blade will most certainly have bladesmiths scurrying to hammer out new products. In the realm of the new “boutique” steels, Nitro V has a place near the top, especially if you are going to be using your knife in humid or coastal environments. This is truly a “super-steel” for the ages.

3 comments on “How Good is Nitro V Stainless Steel?”