Knife laws in Hawaii can be a little tricky. This guide will teach you the knife law in an easy to understand manner. It will present excerpts of the law as well as case precedence.

Only balisongs and switchblades are banned in Hawaii. Any other type of knife is legal.

(a) Any person, not authorized by law, who carries concealed upon the person’s self or within any vehicle used or occupied by the person or who is found armed with any dirk, dagger, blackjack, slug shot, billy, metal knuckles, pistol, or other deadly or dangerous weapon shall be guilty of a misdemeanor and may be immediately arrested without warrant by any sheriff, police officer, or other officer or person. Any weapon, above enumerated, upon conviction of the one carrying or possessing it under this section, shall be summarily destroyed by the chief of police or sheriff.

(b) Whoever knowingly possesses or intentionally uses or threatens to use a deadly or dangerous weapon while engaged in the commission of a crime shall be guilty of a class C felony.

The case of State vs. Giltner in 1975 defined “deadly or dangerous weapon” as “an instrument designed primarily as a weapon, or one which has been diverted from its normal use and prepared and modified for combat purposes.” In this case, a police officer found Giltner with a deep-sea dive knife who’s blade was 6.5 inches and arrested Giltner for carrying a deadly weapon. It was later decided that a deep-sea dive knife is not a deadly weapon.

The case State vs. Muliufi in 1982 further expanded upon the definition of “deadly or dangerous weapon” with “an instrument closely associated with criminal activity whose sole design and purpose is to inflict bodily injury or death upon another human being or is designed primarily as a weapon, or one which has been diverted from its normal use and prepared and modified for combat purposes.” In this case, the court ruled that nunchaku sticks  are not deadly weapons since they are used as training tools in the martial arts.

On top of this, the Judge’s opinion in State vs. Rackle in 1974 found that “a knife should not be considered a “deadly or dangerous weapon'” just because it is a knife. The manner in which it is used must be taken into account. The Judge also stated that, when “words of general description follow the enumeration of certain things, those words are restricted in their meaning to objects of like kind and character with those specified.” Therefore, if a knife does not fit within the dirk or dagger category, it can not be automatically classified as a dangerous weapon.

(a) Whoever knowingly manufactures, sells, transfers, possesses, or transports in the State any switchblade knife, being any knife having a blade which opens automatically (1) by hand pressure applied to a button or other device in the handle of the knife, or (2) by operation of inertia, gravity, or both, shall be guilty of a misdemeanor.

(a) Whoever knowingly manufactures, sells, transfers, possesses, or transports in the State any butterfly knife, being a knife having a blade encased in a split handle that manually unfolds with hand or wrist action with the assistance of inertia, gravity or both, shall be guilty of a misdemeanor.

Note that this is not legal advice and I am not a lawyer. Talk to a lawyer in Hawaii if you need help. There might also be city knife laws as well.

If you have any questions, post it in the comment section below. I’ll try to answer it.

If you’re wondering what knife is really not controversial or illegal to carry, here’s a great one with a connection to Hawaii!  It’s the US Army Hawaii Garrison 3 in 1 Tactical Pocket Knife.   It’s a really aggressive-looking multi-function 3-in-one pocket knife with a glass-breaking tip and seatbelt cutter.  For around $20 I wouldn’t call it a high- end collector’s item or keepsake, but it’s good enough for daily use for quite some time.  The stainless steel blade is 3.5 inches long and 3mm thick and it’s spring assisted.  Did I mention it was cool-looking? 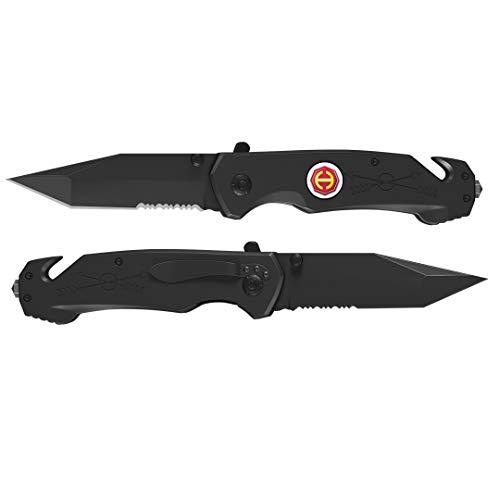