After reading a few Cold Steel Kukri Machete review articles, most people still think about a certain question: is the tool really worthy of a purchase? Indeed, many reviews simply lack detail, making it impossible for common consumers to know for sure whether the abovementioned offering would suit their needs and preferences. It is for this very reason that this article would not only contain discussions about the product’s pros and cons, but would also include a simple buying guide. Of course, before going into such details, listing the machete’s main qualities would be a must: 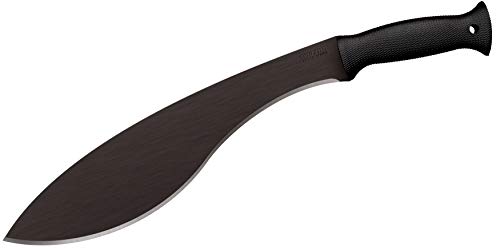 What to Look for in a Machete

At this point, explaining the key machete-buying guidelines would be crucial, after all such pointers would also be the criteria used for the main review. The first feature that one should pay attention to is weight. To explain, while the mass of a tool might not seem to be important, one should remember that heaviness and stability are interconnected. Given that a sufficiently weighty blade brings forth balance, relying on it means that it would not be necessary to worry about each stroke’s strength. Alternatively, an excessively heavy blade would only cause fatigue, making the task of cutting even the smallest trees cumbersome.

Even though it is vital to pick a “cutting solution” with the right weight, one should never forget about the significance of choosing the right handle material. Simply put, different materials have different advantages and disadvantages. For example, the conventional wooden handle truly shines in terms of “grip” but is completely prone to moisture damage. On the other hand, a handle made of plastic is synonymous with convenience in relation to maintenance, albeit having the tendency to become brittle through time. Indeed, while the perfect handle does not exist, finding one that does not disappoint would always be possible.

Of course, thinking about the matter of shape is essential as well. Those who are just beginning to explore the various facets of such tools would probably believe that variations in form merely have an aesthetic effect. In truth, shape is synonymous with function. Particularly, a kukri has a unique profile, which combines a pointed end, a curved midsection, and a thin base, because it serves three distinct functions. With this in mind, it becomes clear why those who often need to switch between stabbing, chopping, and carving consider the abovementioned tool as ideal for their needs.

The Advantages and Disadvantages of the Cold Steel Kukri Machete

Now, it would finally be appropriate to move on to the actual Cold Steel Kukri Machete review. Starting with the pros of the product, people who seek tools that boast of top-notch comfort would certainly be impressed. As mentioned beforehand, Cold Steel’s offering weighs 16 ounces. This means that the “cutting solution” is neither too light nor too heavy. Specifically, a few strikes should be more than enough when trimming trees and clearing bushes, which in turn means that you would not end up tired after completing such chores. In addition, the blade’s weight is enough to ensure stability when cutting down a small tree’s trunk.

Aside from having an ideal weight, the aforementioned product is also truly multifunctional. To explain, it is really the very definition of a superb kukri, as the tool never fails to deliver when used for three common tasks. For one, relying on such a product when the need to start a fire arises, which commonly involves the task of stabbing a piece of wood to make a hole, would never end in disappointment. In a similar sense, chopping down branches or even an entire tree using Cold Steel’s offering is akin to using a chainsaw in terms of quickness. Moreover, precisely carving a piece of wood using the tool is definitely possible.

The abovementioned product has an impressive price tag as well. Usually sold at just a little more than $20, such a tool remains among the most popular “cutting solutions”. As a matter of fact, since most of its competitors are priced at more than $40, despite essentially having the same length and weight, the previously mentioned offering is highly recommended by enthusiasts. Of course, you might have a question in mind at this point: what separates a 20 to 40 dollar kukri from those sold for less than five dollars? Well, aside from having an actual warranty, the former does not quickly rust. Check the machete out on Amazon.

So far, in this Cold Steel Kukri Machete review, it is already clear that if you are looking for a reliable multipurpose blade, you would be pleased with the product. You should remember however, that the abovementioned tool is not without flaw. For one, its handle is certainly far from perfect, especially since it becomes rather slippery after a while. Indeed, if only the handle had soft rubber parts, it would have been much easier to hold. Furthermore, since the handle is made entirely of plastic, it does not properly absorb shock, which in turn means that exerting excessive force when using the tool would be rather dangerous.

Aside from thinking about the issue of lackluster handles, those planning to invest in the aforesaid offering should also spend sufficient time considering some sheath concerns. To explain, even though the product comes with an impressive-sounding Cor-Ex sheath, such a “blade guard” is undeniably subpar in terms of functionality. For one, it has an excessive amount of buttons, which in turn might make the tool unreliable during critical scenarios. In a similar sense, the sheath’s lack of holes might bring forth problems in relation to convenience. After all, attaching strings to the sheath for the sake of hanging the kukri is a common practice.

What People are Saying About Cold Steel’s Machete

While it is already clear that Cold Steel’s product is remarkable albeit slightly flawed, gathering opinion-related information is still necessary. Most people who have used the tool for quite a while agree that sharpening the blade is hassle-free. In this sense, keeping the edge in tiptop shape would never be a time-consuming endeavor. Of course, since the product is easy enough to sharpen, even individuals who find it a bit unimpressive at first should be more than capable of perfecting the blade in no time. Indeed, many opt to purchase the aforesaid offering for this reason alone.

In addition to garnering praises due to such sharpening advantages, the tool is also widely considered as impressively “tip heavy”. Those just learning about kukris would probably wonder why an imbalanced weight distribution would be beneficial. Well, you should always remember that such a product has three main functions, namely stabbing, cutting, and carving. If the blade’s tip were not heavier than its other parts, any stabbing action would require considerable effort. Likewise, cutting and carving tasks would become synonymous with insufficient precision if not for the unique weight distribution.

It is undeniable that countless individuals also assert that the aforementioned tool is among the most durable cutting solutions in the market. As a matter of fact, quite a number of people claim that they have been using their kukri for years and never have they held a much sturdier blade in their hand. Of course, many also choose to highlight the fact that the product is virtually immune to rust, which is confusing since blades made of carbon steel are supposedly vulnerable to corrosion. Quite probably, the product’s matte finish prevents rusting and does not merely add to its aesthetics.

As made clear, the aforementioned offering’s advantages outweigh its rather minimal shortcomings. It is for this very reason that more and more individuals are finally opting to invest in the tool just to discover its perks firsthand. After all, it would be difficult to find a similarly priced product that excels in two key aspects: durability and functionality. All in all, the verdict for this Cold Steel Kukri Machete review is quite simple: if you currently looking for a reliable blade, you should keep in mind that making the right choice is as easy as buying such an impressive offering. You can get your hands on this machete at Amazon.